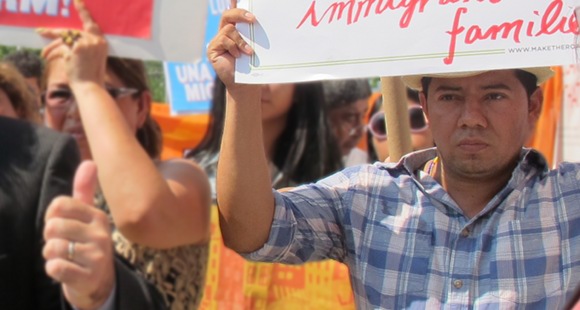 Comprehensive immigration reform would change the lives of 11 million aspiring Americans living in the shadows. I wanted to take a look at what reform would mean to immigrants here on Long Island.

Carlos Reyes was born in 1977 in war-torn El Salvador. Like many who grew up during that time, opportunities were scarce and the Civil War was raging, killing countless innocent civilians.

Seeking better opportunities for himself and his family, Carlos made the difficult decision to leave his father, mother and younger sister and make a new life in the United States in 1994. He’s called Long Island home since, living in Brentwood for 10 years before moving to Central Islip, where he continues to live today.

“In El Salvador I always heard that New York and the United States had better opportunities,” Carlos told me during a sit down conversation at the Brentwood Public Library.

Just prior to meeting with me, he was wrapping up some advocacy work he was doing with Make the Road New York at the nearby El Salvador Consulate. He’s a familiar face at the library and in the community, stopping to exchange hellos with library-goers and employees alike as we walked around. Carlos is an avid reader, and during his off time he can often be found at the library. 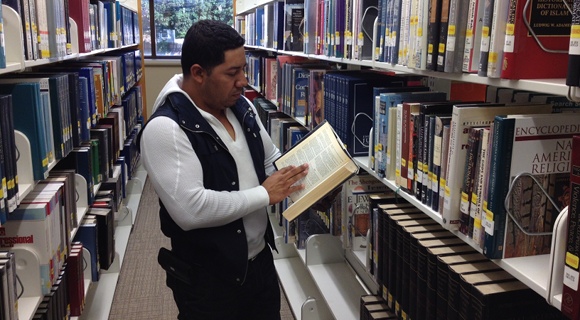 As I spoke with Carlos, I asked him about his life, his family, his dreams and aspirations, and why he does all of this good work for the immigrant advocacy community.

Since he was young, Carlos knew he wanted to study medicine and become a doctor to help others, but due to his status as an undocumented immigrant, he has been unable to attend school and pursue his dreams.

Because of that, he has chosen to help others in a different way, devoting his time advocating for comprehensive immigration reform with Make the Road New York and helping others realize their full potential as citizens.

Immigration reform would change the lives of more than 11 million people across the country, including the lives of Carlos and his family. This is the country that he calls home, he’s spent most of his life here, he’s grown roots here and he is a part of the community.

When the DREAM Act was first announced in 2001, Carlos was among the millions of young people who could have benefitted from such a landmark bill. Carlos recalls that at the time, he was just 24 and could have used the legalization offered by the DREAM Act to attend college. Now, some 12 years later, the bill still hasn’t passed and New York’s own version of the DREAM Act continues to languish in the state legislature.

Despite that, Carlos continues to do great work in the community through advocacy and promoting civic engagement.

Even though he’s unable to vote himself, he was among those who helped to register more than 9,000 new voters on Long Island this year. He recently spoke at a rally marking National Voter Registration Day at the Nassau County Legislature. The event commemorated all the work that advocacy organizations have done on Long Island in helping to register new voters. 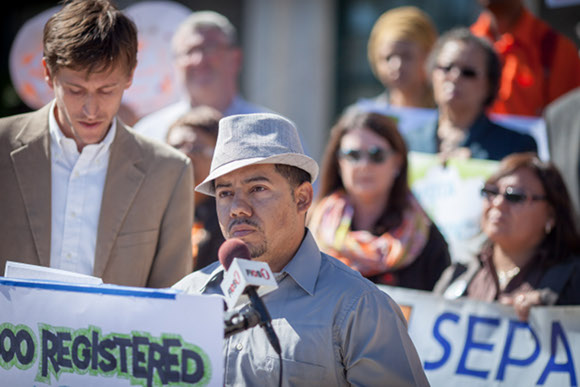 So I asked Carlos, how does it feel to be out in the community and to help others register to vote, while he himself is unable to be a part of civic life.

“I feel good and bad,” Carlos told me. “Good because I can help people use their own voice and their vote to choose their elected officials, but I also feel bad because I can’t use my own voice to do that.”

That’s the reason why Carlos continues fighting for comprehensive immigration reform. As one of the 11 million that could stand to benefit, I asked Carlos what immigration reform would mean for him and his family.

“I’ve never been back to my home country in almost 20 years,” Carlos told me. Not only would reform finally allow Carlos the opportunity to fully be a part of American society, to go to school and to vote, it would allow him to travel and see his family again after two decades. He explained how upsetting it was for him when both of his grandmothers passed away and he was unable to attend their funerals.

That’s why Carlos is an advocate for immigration reform. Millions of aspiring Americans are just like him, separated from their families, unable to fully contribute to the country they call home. Carlos uses his personal story to educate others on the contributions that immigrants make to this country. Many view immigrants as outsiders that don’t contribute to society, and Carlos wants to change that.

“Even if someone wasn’t born here, if they have lived here for many years, if they contribute to the country and the economy, whether they run a business or started a family and raised their kids here, these people are part of America.”