Taiko, which means drum in Japanese, is a tradition that spans a thousand years. It was originally used as a way of alerting villagers when they were being threatened either by natural disasters or invaded. It was also used in temples to awaken the gods or in festivals as a thanks for the harvest.

“Taiko was the heartbeat of the Japanese people,” according to Gerry Senese, the director of Ryu Shu Kan Japanese Arts Center in Farmingville.

It wasn’t until after World War II that a Japanese jazz drummer, wanting to invigorate the Asian nation’s spirit after the war devastation, incorporated traditional Japanese folk music with taiko drums. The result was an ensemble of taiko drummers who combined dance aspects with folk music and jazz beats. It is this particular style that is popular today throughout the world and the one that is offered in studios like Ryu Shu Kan. 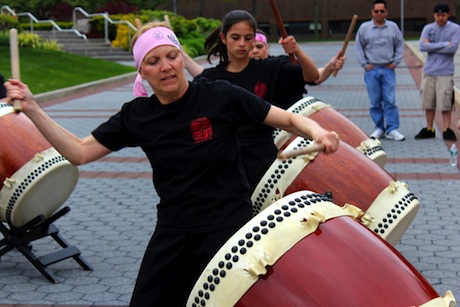 After taking Taiko lessons at Stony Brook University in 1998, Senese and his wife, Hiroko, started offering classes in his studio. A year later, the Ryu Shu Taiko group was born.

When it came time to buy the actual drums, however, Gerry and Hiroko found out that each Japanese-made drum costs roughly $6000 – so they decided to make their own.

In a stroke of imagination and creativity, they went to East End vineyards and obtained old barrels of wine no longer in use. Then, they took each wine barrel apart, glued together the staves (the thin strips of wood along the sides of the barrel) and sanded and varnished them. The drumheads came from cowhides purchased from Chicago slaughterhouses. They stretched the hides and hammered them to the body of the drum with tacks from Japan. For a fraction of the price, they had created their own Long Island take on the taiko drum.