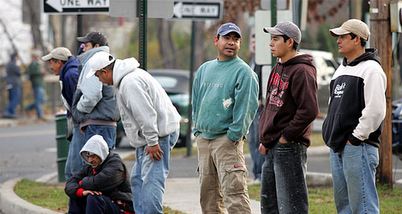 A federal district court yesterday affirmed the right of Latino day laborers in Oyster Bay, Long Island to seek work in public spaces, following a lawsuit filed in five years ago. The decision permanently struck down a town ordinance that prohibited people from soliciting work for violating the First Amendment.

For nearly two decades, Latino day laborers have made their living in the Long Island town of Oyster Bay gathering together to solicit work. But in 2009, the town enacted an ordinance that targeted these laborers and attempted to prevent them from seeking work.

The ordinance would have had a devastating effect on the workers, who typically depend on these temporary jobs to feed their families and frequently lack transportation to seek work elsewhere.

The ordinance prohibited standing on the sidewalk to solicit employment, and barred drivers from stopping to hire these workers. Supposedly enacted to make sidewalks and streets safer for pedestrians and traffic, the ordinance violated the First Amendment by outlawing basic speech such as “waving arms,” “making hand signals,” “waving signs” and “jumping up and down.” It also criminalized this speech in “all of the areas dedicated to public use for public street purposes” including parks, sidewalks, medians and curbs. Moreover, it criminalized a wide variety of constitutionally protected speech that presents no threat to traffic safety, such as students soliciting cars for a high school carwash fundraiser.

In its decision, the Eastern District of New York struck down the ordinance for being in violation of the First Amendment, which protects the rights of day laborers to gather in public spaces and ask for work. The decision also noted that there are current public safety laws in place – such as New York State’s vehicle and traffic laws – that can be used to protect motorists and pedestrians.

“Our constitution protects the rights of American newcomers seeking the opportunity to work hard for a better quality of life,” said Corey Stoughton, New York Civil Liberty Union Supervising Senior Staff Attorney. “We should be celebrating the entrepreneurial spirit of day laborers not stigmatizing them.”

The lawsuit was filed in 2010 by the New York Civil Liberties Union, the American Civil Liberties Union and LatinoJustice PRLDEF on behalf of the Centro de la Comunidad Hispana de Locust Valley and the Workplace Project, two Long Island organizations that protect the rights of Latino day laborers, and came in the context of spate of local laws that overstepped constitutional boundaries in an effort by states and municipalities to assert themselves on immigration related matters.