Amid record rates of unemployment, mounting foreclosures, and scorching heat this summer, Muslims in America (and around the globe) have begun fasting the month of Ramadan. They do so to feel the plight of the poor and needy, cultivate discipline and patience, and rejuvenate spiritually.

From dawn to dusk each day for 30 days, Muslims engage in an absolute fast, abstaining from all food and drink. All Muslims are required to fast regardless of gender, race, wealth, education, or marital status. A few exceptions exist for young children, the elderly, those who are ill, one who is traveling and pregnant women.

It is worth noting that the fast is not limited to its physical dimension.

Islamic tradition provides that while fasting, Muslims should also avoid using obscenities, quarreling, flirting, gossiping and bad-mouthing others. Muslims are taught that if someone such as a friend, colleague, or family member attempts to pick a fight with them during this time, they should turn away while commenting only, “I am fasting.”

The intended purpose of the fast is manifold.

First, fasting during Ramadan is meant to cultivate discipline. By denying oneself that cup of coffee or blueberry scone one craves—day in and day out for one entire month—one can’t help but develop self-restraint. That self-control can be applied in many of life’s other contexts, like remaining monogamous in a marriage.

The Ramadan fast is also intended to foster compassion for those who are less fortunate than oneself. Feeling thirsty or hungry throughout the day is a very real and personal reminder of those who are suffering daily from food scarcity—whether they are starving halfway across the world in Africa or just around the corner in Detroit, Michigan. 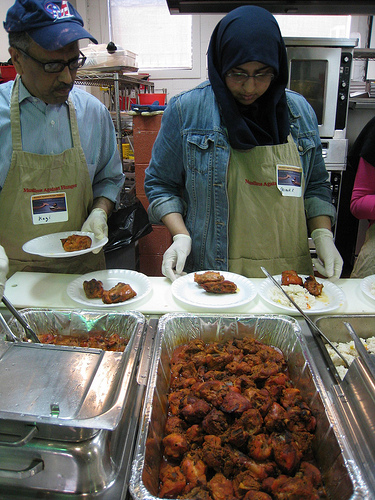 Poverty, hunger and homelessness are the regular-life realities of many and that becomes difficult to ignore or forget when you personally experience the pangs of hunger or are parched with thirst. Quickly, one realizes how much we take for granted being able to drive through a McDonald’s or order a sushi lunch any time we want. In the end, the fasting Muslim gets to break what is after all a voluntary fast; others are not as fortunate.

As alluded to above, Ramadan is also a month for self-reflection, redemption and renewal.

Indeed, many use Ramadan as an opportunity to overcome personal shortcomings and personality flaws. So, for instance, these bad habits may include: smoking, constantly using expletives, excessive shopping or back-stabbing others.

Many Muslims also engage in increased acts of worship during this month by reading the Qur’an, which Muslims regard as the literal word of God. They may also attend additional prayers during the evenings at their local mosque. Before or after prayer, many Muslims also make supplications to God for certain blessings like good health for their children, a swift recovery for those who are ill, relief for people suffering from famine or drought around the world. Muslims also use this as an opportunity to request God’s forgiveness for sins and past transgressions committed.

Charitable acts are highly valued in Islamic tradition and during Ramadan many Muslims strive to increase such deeds. For example, the Muslims Against Hunger Project have launched a Ramadan campaign to feed 20,000 meals in 20 cities around the United States, Canada, and Haiti. They aim to pay back to society by helping the hungry living in our backyards.

It is significant to note that fasting is not exclusive to Muslims. According to the Bible, Moses fasted for forty days and forty nights; David and Jesus are also described as participating in fasts. In fact, many of the principles articulated above also exist to some degree in Christian and Jewish philosophy, as well. While all sorts of extremists emphasize and exploit the differences among us, so many commonalities exist binding us as a human family.

This Ramadan, my prayer is that we collectively realize that and actively work to counter the hate.

Engy Abdelkader is a Legal Fellow with the Institute for Social Policy and Understanding. This column originally appeared on The Huffington Post.