The Harp and the Eagle: Irish American Volunteers and the Union Army, 1861 to 1865
By Susannah Ural Bruce
NYU Press, 2006 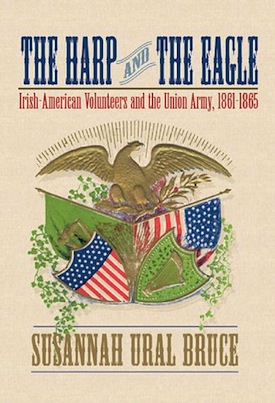 A complete list of articles on The Immigrants’ Civil War is at the bottom of this review.

The Irish are a problem for Civil War historians. Irish filled the ranks of the Union Army, and Irish units like the Irish Brigade were well known for their bravery. Yet the Irish drank deeply of the Democratic brew of racism: They consistently opposed the Lincoln administration during the war, and they erupted in insurrection and race riots at the imposition of the draft.

In The Harp and the Eagle, historian Susannah Ural Bruce tries to place the Irish army volunteer in the context of an Irish community that came to reject the Union war effort. She depicts an Irish soldiery that joins the Union Army as much for what their service will mean to Ireland as for any devotion to the United States. The Irish soldier may have seen himself more as an ally of the Union Army than as a member of it, in her view.

While the book is engaging and covers new ground, it has too great a focus on Irish volunteers serving in identifiably Irish units. Only one in five Irish in the army was a member of a unit like the Irish Brigade. Most Irishmen served in mixed units that included native-born as well as immigrants from other countries. Unlike those who joined the Irish Brigade, these men may not have prioritized their Irishness over their Americaness. But we can’t tell from Bruce, because she uses the Irish Brigade experience as a proxy for Irish American soldiers.

That shortcoming aside, the book does a fine job of examining the politics of Irish New York and Boston at the outbreak of hostilities. These were new communities whose character had only been formed in the decade before the outbreak of the war. The Irish were collectively the poorest and most marginalized group of white people in America. Their communal leaders were new to America themselves and often guessed wrong about the future course of American politics. Those leaders devoted as much time to plotting the armed liberation of Ireland as to the development of their own communities in America, and the demands of Irish nationalism slowed assimilation and derailed economic advancement.

Irish immigrants arriving in America faced violent discrimination, and that led many Irish to interpret the actions of the government through a lens of distrust. The Republican Party included many anti-immigrant Know Nothings, and the Irish assumed that President Lincoln was cut from the same cloth. When an Irish unit bled on a battlefield or an Irish officer did not get a promotion, many Irish saw the secret hand of the Know Nothings behind it.

The destructive war for the Union chewed up the young men whom Irish families relied on for economic survival. The wives and orphans of soldiers who were killed at Antietam and Gettysburg were abandoned by widows’ aid societies that only helped Protestants. Dead soldiers’ destitute parents in Ireland were left to starve when the remittances sent by their sons were cut off by a bullet, and when the federal government refused to pay survivor benefits to family members living outside the US.  This led to a feeling of abandonment by the Irish, who saw their sacrifices disregarded by the native born.

Professional historians are only recently addressing the experiences of immigrants in 19th century America and Ural Bruce’s contribution to this project helps give focus to a desperate community thrust into an apocalyptic situation.