I was no longer listening to the facilitator’s instructions; I was too focused on deciding which color pipe cleaner I wanted to grab from the center of the circle. Everyone shapes their identity with a series of tangible and intangible factors. The sum of these individual parts totals our being, our essence. When asked to pick out pipe cleaners that represent the five main components of my identity, I felt overwhelmed. Was being Muslim more defining than being Pakistani? Was I a student first or a daughter first? My mind was crowded with many of these questions and I desperately needed some clarity. After a couple minutes of silent contemplation, I realized that the most defining feature of my identity is that I am a human being. With this identity marker, comes the responsibility to others and ourselves to ensure that everyone is encouraged and allowed to freely express themselves.

In January 2012, I had the honor of going to Jerusalem through my participation in the Heroes Are Made through Service and Action (HAMSA) program. This unique and life-changing program brings together college-aged students from different backgrounds—American and Israeli, Jewish and Muslim—with the goal of empowering us to promote change in a local and global community through learning and collaboration.

This program is centered around the mantra of “tikkun olam,” a Hebrew phrase meaning “repairing the world,” and symbolizing the idea of creating environments in which we are able to care for one another despite perceived differences. The program is organized through the hard work of the Suffolk Y Jewish Community Center, the Islamic Center of Long Island, the French Hill Matnas in Jerusalem and the Beit Safafa Community Center in Jerusalem, and is funded by the UJA-Federation of New York.

For most of the American students, our trip in January was the first time we had been to Israel; some of the participants, however, had already been to Israel through the birthright program. Regardless, this trip was a unique and eye-opening experience for all of the Hamsonians, as we called ourselves.

On New Year’s Day, 10 New Yorkers anxiously arrived at JFK awaiting a very long flight to Jerusalem. After a short drive to the community center in Israel, we were introduced to the group of Jewish and Muslim students that we were spending the next week with. Everyone was assigned host families of the opposite religion—American Muslims stayed with Israeli Jews and vice versa—and after some team building workshops we were sent home for the night. Regardless of the language, cultural, and religious barriers, everyone immediately formed connections. 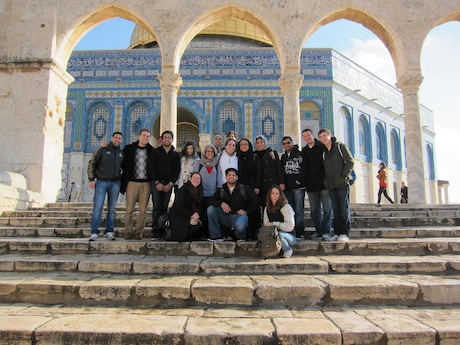 The entire group posing in front of the Dome of the Rock, a Muslim holy site in Jerusalem.

I can speak on behalf of the group when I say that although this trip challenged me to get out of my comfort zone, through this leap of faith, I was able to learn about many different perspectives. In addition to engaging dialogue workshops, we had the opportunity to visit historical sites throughout Jerusalem, including the Dome of the Rock in the Old City, Tuba Zangaria, and Yad Vashem. Through tours by a local Israeli guide, we were able to get an inside perspective about the significance and importance of these sites.

After a morning of sightseeing, we engaged in conversations regarding our feelings and observations from the morning. At times, the conversations got very emotional and personal, but we always found a way to reconnect on a common theme at the end of the night. These dialogues really helped to encourage each one of us to be concerned for the welfare of others despite perceived differences.

The program didn’t end with the one-week stay in Jerusalem. Earlier this summer in July, the Muslim and Jewish students from Israel spent one week in New York. This week was filled with workshops and dialogues centered on the theme of learning about tools to create change in our communities. Not only did we explore New York City, but we also had a chance to visit our nation’s capital and learn about the history of the United States.

Perhaps one of the most enjoyable parts of the week was a visit to Sesame Street, where all the participants were able to relive their childhood and learn about Sesame Street’s international co-productions, which focus on country-specific issues and challenges. In addition, we got to design our own co-production addressing an issue that our group found important. Rather than addressing the obvious issue of discrimination and coexistence, my group created a mini-show centered around the issue of sustainability. As we laughed and smiled, trying to come up with the plot for a children’s show, I realized how similar we all are.

Throughout both trips, we told one another personal stories about moments of vulnerability and discrimination we had faced as both Muslims and Jews. A 20-year-old Israeli Muslim girl was asked by her boss at work to take off her keffiyeh, which symbolizes Palestine, because it might give the wrong impression. In another story, a 25-year-old Israeli Jewish girl is unable to marry her fiancé in Israel because her fiancé is Christian and inter-religious marriages are not allowed. However, what I found inspiring is despite these instances, as a group, we are resilient. Everyone is making efforts in their personal and professional lives to make a change. 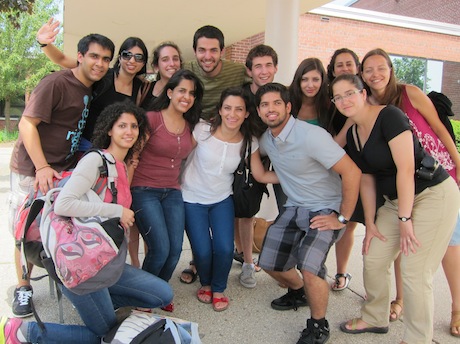 Our group, posing in front of the Suffolk Y Jewish Community Center in Commack, reunited in New York to continue the dialogue we began in Israel.

In one of our final workshops in New York we learned about the Israeli writer Amos Oz and what he calls his “teaspoon philosophy.” When an ordinary man is faced with an enormous fire, he has a few choices, one of which is to fill a teaspoon with water, over and over again, and splash it on the blaze. “Everyone has a teaspoon” and everyone is fighting his or her own fire or cause in life. Through this joint desire to make a change in the world we might actually to do so. The goal of this program was not to find a solution to the complicated Arab-Israeli conflict but was to foster a new sense of understanding among students and develop life long friendships.

It is so important for us, for humanity, to be able to look past labels and see ourselves in others. Every generation has a catalyst, whether tangible or intangible, that has the power to unify people across different social, political, and economic backgrounds. Our generation has unique catalyst, our voices. We have the ability to try to transcend various social biases and make the world more tolerating and accepting for our children and ourselves.

Sarah Khan is a Roslyn resident and is currently pursuing a career in dentistry at Stony Brook School of Dental Medicine.