On Sunday, I had the privilege of attending the retirement service for Rev. Allan Ramirez, the pastor of the Brookville Reformed Church.

For more than 30 years, Allan has been an important force in the immigrant rights community on Long Island. As an Ecuadorian-immigrant pastor serving a majority Anglo congregation, he’s worked to bridge the gap between white Long Islanders and new Latino immigrants. He eschews political affiliations, and over the years he hasn’t hesitated to confront politicians, both Democrat and Republican, if he believes that they’re targeting Latinos with their words or policies.

Allan has also seen the economic extremes in this world, born in 1953 as the next-to-last of nine children in a poor Guayaquil family, and eventually becoming the pastor of a congregation on the Gold Coast, one of the most affluent areas in the country. That’s been a boon: He’s comfortable socializing with any type of person, something that has enabled him to bridge the gap between different economic classes on Long Island.

One of the moments where I was able to see Allan in action was in March 2011. He joined a coalition of leaders to call for the U.S. Department of Justice to investigate how Suffolk officials had handled – and ignored – hate crimes. I was part of that group, as was Mark Potok of Southern Poverty Law Center and Joselo Lucero, the brother of hate crime victim Marcelo Lucero. The coalition put pressure on the Justice Department to release meaningful recommendations for Suffolk County. Shortly after the press conference, the DOJ released a letter pointing out a host of deficiencies in the county’s hate crime policing. Our presence surely wasn’t the only factor moving the department to action, but it certainly helped to have the voice of respected community leaders like Allan. 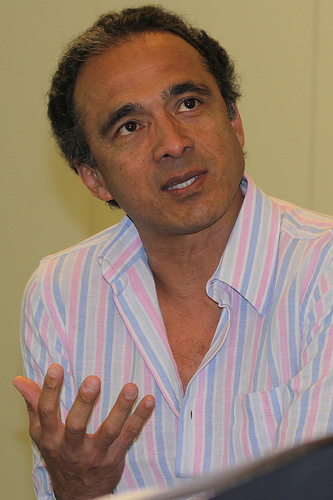 Ramirez at a June 2011 symposium organized by the Hagedorn Foundation. (Credit: Ted Hesson)

At Sunday’s service, I wasn’t surprised to see the entire church filled with congregants, friends, elected officials, colleagues, and community and faith leaders, many of them sharing their love and respect for Allan and noting how much he will be missed. From Nassau County Executive Ed Mangano to George Siberon, the executive director of the Hempstead Hispanic Civic Association, a parade of speakers took to the microphone to give their farewell to Allan. I kept hearing him described the same way: genuine, courageous, passionate, humble.

Allan spoke of the great respect he maintained for his congregation, whose commitment to his work allowed him to devote his energies to social justice causes, including immigrant rights. If he made controversial statements in the media – and he has definitely made a few – his congregation backed him.

In the brief three years that I have known Allan, his message of “love thy neighbor as thyself” was always part of the conversation. Long Island Wins will dearly miss him, as will the entire Long Island community he has touched and served over the past three decades.