Do you think of global volunteerism and young adults creating—opportunity and hope—not destroying?

Do you envision a helping hand?

Allow me to introduce you to Aysha Mohsin: law school grad, business analyst and writer. She also serves as the director of program development for United for Service, a California-based non-profit providing global volunteering opportunities to young Muslims looking to leave a tangibly positive imprint on their world.

Founded two years ago, United for Service works to alleviate the suffering of those in developing countries by sponsoring annual trips abroad. During a recent three-week trip to Morocco, for instance, Muslim volunteers hosted free health clinics and taught local village children how to brush their teeth.

The young adults also participated in agricultural farming projects, irrigation initiatives; they interned in a private and public hospital, and also visited orphanages. The non-profit sponsors annual trips to Mexico and India, as well.

“By witnessing the needs and challenges faced by others first-hand,” Ms. Mohsin explains, “volunteers are much more motivated and inspired to come home and serve their local community and this is behavior we strive to foster.”

* * *
In 2005, Zubaid Kazmi and his wife participated in a Habitat for Humanityglobal trip to Sri Lanka following the earthquake and tsunami that devastated the country.

“This was one of the best experiences we have ever had,” remembers Kazmi. “The connections we made with the people we were working with—the other volunteers and the locals—continue to have an impact on us today.”

In fact, Kazmi tried to recreate the experience a few years later by joining up with some fellow volunteers for another Habitat trip but this time to work in a rural part of India. When the trip fell apart and Habitat rendered it unviable due to the paucity of volunteers, Kazmi decided to go anyway along with three others.

“The four of us—an Atheist, Christian, Jew and me, a Muslim—spent our time building a fence around one of the schools to keep the grazing animals out of the area the kids used to play in,” describes Kazmi. “And, we helped with the many re-forestation efforts around the forest.”

The personal impact of these experiences was so profound that Kazmi decided to share it with others. In 2009, he created Sharing Humanity.

“Our objective is to bring together people from different backgrounds to work toward a common good,” says Kazmi, who also serves as executive director of the Washington, DC, based group. “We not only like to bring volunteers from different faiths and ethnicities, but we want people to be exposed to cultures and regions that they would normally know nothing about.”

The group’s projects have included building schools in rural India and Bangladesh. Volunteers, who ranged in age from 29 to 56, have also traveled back to rural Sri Lanka to work at a Catholic run orphanage for Hindu and Buddhist children. 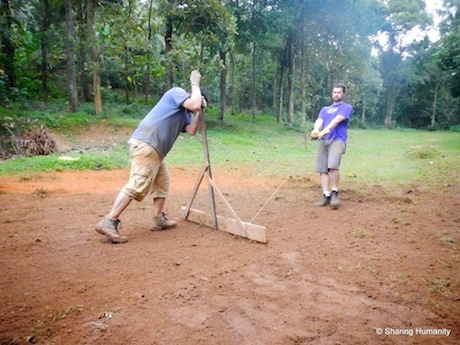 During a 2011 trip to Hewadiwela, Sri Lanka, Sharing Humanity volunteers use homemade tools to to level a recreational field at an orphanage.

“It is through the understanding I have of the life of the Prophet Muhammad that compelled me to start the organization … [he was] a man who prayed for his enemies, checked in on his oppressors when they were absent from their daily torment of him, forgave those that wronged him and promoted the equal status of all regardless of faith, gender or ethnicity,” reflects Kazmi. “For me, Sharing Humanity was founded on the principle that all of God’s creation should help one another whenever possible.”

* * *
Zahra Billoo is a hijab-donning attorney, frequent media spokeswoman and a committed volunteer with Project Feed, a collective based in the San Francisco Bay area. The project was started during the Muslim holy month of Ramadan in 2008 following reflections upon the deeper significance of a daily fast and those who go hungry regularly.

Once a month, volunteers gather in the Bay Area to make and distribute lunches for the homeless. In May, for example, dozens came out to the Jones Street Mosque. There, they packaged and distributed 600 lunches—consisting of peanut butter and jelly sandwiches, granola bars, fruits and beverages—to the homeless.

“They are our neighbors and so much in need of support,” explains Ms. Billoo.

* * *
When Salim Patel isn’t busy serving as president of New Jersey’s Passaic County Board of Education, you may find him coordinating activities as board chairperson of SMILE. Founded last year, the Jersey-based non-profit aims to serve and transform local downtrodden communities.

It boasts a food pantry, social services, a free health clinic, and an incipient art gallery.

“The food pantry and the free health clinic provide an answer to emergency problems facing our most impoverished communities, however, these are not the final solution,” explains Patel. “In our estimation, poverty is alleviated when the morale of the community turns toward something uplifting and inspiring. Our arts program, which includes the art gallery, is meant to provide that inspiration to the community and its youth.”

One of SMILE’s monthly programs is its senior’s project where American Muslim youth visit a local senior’s residence. They help make gingerbread houses, decorate birdhouses and fishbowls and play chess.

Tariq Hussain, a private attorney and SMILE’s executive director, reflects, “The goal of the program is to bring some joy to the elderly who are too often neglected. Very few of the seniors have families that visit regularly and the residence itself offers little to no activities.”

Another SMILE program features regular park cleanups. During one such outing at a small park near an elementary school that the kids use in Passaic, Patel was personally impacted by the experience.

“As we collected all the litter, one of our volunteers stumbled upon a used syringe,” remembers Patel. “The moment served as a brief reminder as to why our work is so sorely needed in this community. Drugs, gangs and other social maladies are a byproduct of poverty, the solution lies in offering the youth in this community something better. This is the goal of SMILE.”

While most of the recipients of SMILE’s good will are not Muslim, Patel depicts the organization itself as having been inspired by Islamic belief.

“When we set out to establish our food pantry and eventually SMILE, we were guided by Islam and the verse from the Quran that says: ‘We feed for the sake of God alone, no reward do we seek nor thanks,’” states Patel.

* * *
Any lawyer will tell you that surviving the first year of law school is an accomplishment in and of itself. Not so for Sammy Nabulsi, who is entering his second year of law school at Suffolk University in Boston, Massachusetts.

“My greatest feat was running the Boston Marathon on behalf of the American Liver Foundation,” says Nabulsi.

In addition to raising $4,000 for the foundation, Nabulsi also participated in the patient-runner program which paired him up with a liver patient.

“My patient-partner was a young 12-year-old boy named Jonathan. Jonathan is a boy from Lynn, Massachusetts, who suffers from biliary atresia—a liver disease resulting in inevitable liver failure,” elaborated Nabulsi. “Jonathan has been on the list to receive a liver transplant for quite some time, and it was incredible to be running the Boston Marathon on his behalf.”

Last September, MCN was an active part of 9/11 remembrance events. Staff and volunteers spent the tenth anniversary of 9/11 preparing 300 bagged lunches ultimately distributed around the city to those in need. During that time MCN also participated in the annual Children of Abraham Peace Walk and arranged children’s workshops to make thank you cards for the volunteer firemen.

“During the walk, the children presented their cards and gifts to the firemen in appreciation for putting their lives at risk on September 11, 2001,” says MCN Board Chair Debbie Almontaser.

* * *
Across the river back in New Jersey, Mashal Anjum organizes a major fundraising event with the Thaakat Foundation, a non-profit aimed at promoting charitable giving and volunteerism among students and young professionals alike. She strives to raise enough money to build a school for impoverished Pakistani children who live in a trash dump.

“The people living there are so poor that they burn garbage, and research finds that burning garbage releases a dangerous chemical known as dioxin which causes terrible respiratory problems,” explains Anjum. “The villagers want their children to go to school but the school is too close to where the garbage is burnt, so Thaakat is raising funds to build a school a mile away from the village.”

Thaakat initiatives serve people irrespective of religion or race, but like those profiled above Anjum’s charitable giving is motivated by her commitment to Islam.

“I personally believe that I will be asked by God about what I did with my time and resources, of which we are so blessed. It cannot be random that a person like me is given so much compared to a mother and her many children, all of whom are going to sleep hungry,” articulates Anjum. “I believe that some people are sent to this world to do good for others and that is our test.”

Engy Abdelkader is a legal fellow with the Institute for Social Policy and Understanding, a nonpartisan think tank based in Washington, DC.