Osman Canales has become a home-grown leader in the struggle for the DREAM Act on Long Island. I spoke with the young Salvadoran immigrant who is being honored by CARECEN on Thursday.

Osman was born in a country at war. When he was a toddler, El Salvador was in the last years of a civil war that claimed 70,000 civilian lives. Osman lived in the town of Poloros in the eastern part of the country. This region was among the most fought over places on earth at the time.

Osman’s father came to the United States to try to create a new life here. Like many Salvadorans, he faced discrimination in the immigration process that was supposed to protect refugees. Fortunately, after a decade-long struggle by CARECEN, Osman’s family finally received protection and the now ten-year-old boy was allowed to enter the United States.

Arriving here unleashed mixed emotions in the boy, Osman recalls. He was happy to be in a land that held so much promise, but he often felt like an outsider. He remembers being bullied in school and made to feel stupid because his English was so elementary. “It was frustrating,” he says, “I felt like I would never learn the language.”

Osman graduated from Walt Whitman High School in Huntington and enrolled in Suffolk Community College. “I have always had to work full-time to support myself, so I could not go full-time to college,” but he knew that an education would allow him to help his community. He was the first person in his family to go to college.

Growing up, Osman knew many undocumented teens. Some had given up on an education because they knew they would be cut off from most jobs because of their legal status. “I knew that if CARECEN had not helped my family get asylum, I might have ended up being undocumented as well,” he says.

Osman devoted his meager free time to learning about the DREA M Act. He reached out to undocumented students he knew and helped organize them into an effective force to fight for immigration reform. “These undocumented youth can’t even go into government buildings because they don’t have papers,” he says, “but they are brave enough to speak out for the DREAM Act.” Osman points out that DREAMers were very influential in turning out the Latino vote in record numbers on Election Day even though they cannot cast ballots themselves.

Osman is encouraged by word that Washington may take up immigration reform. He says that the DREAMers are optimistic that their dreams may finally be realized in the next few years. 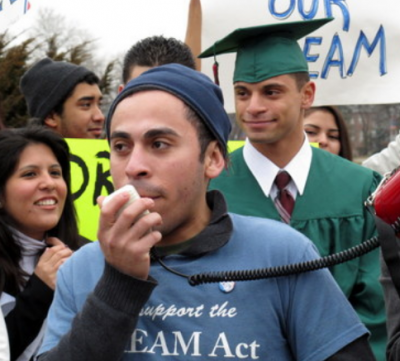