When Black 47’s Larry Kirwan held forth last month at Hofstra University, he combined his 1980s post-punk Celtic music with readings from his memoir and novels. Kirwan sings and writes about the modern Irish diaspora, about young men and women coming from one of Europe’s smallest countries to the world’s most multicultural.

At the show, he told the crowd that every modern Irish immigration story begins in the departure lounge bar at Shannon Airport, which he said, “is one of the loneliest places in the world” because you have just left everyone near and dear to you behind and you don’t know anybody. The lonely émigrés reach out to one another there, and by the third drink they are all crying, “The hell with Ireland,” as they set out for a new chapter in their lives, Kirwan related with a laugh. 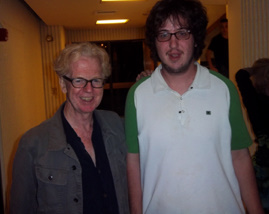 Kirwan liberally performed his own songs to rousing applause during his hour-and-a-half presentation. Even more endearingly, when he read from his riotous novel, “Rockin the Bronx,” he sang the Irish songs the émigrés sang at the airport as they waited for their planes to Boston and New York.  And when he performed a scene from his comic novel, “Liverpool Fantasy,” about what would have happened to the Beatles if Paul McCartney had gone off to become a Vegas singer before the Fab Four hit the big time, he sang the song “Money” interspersed with hilarious mop-top style dialogue.

Many people are familiar with Kirwan’s work with Black 47 or with his political work, but are unaware of his literary and acting skills, and that he does not need a band behind him to sound good. Larry is an excellent guitarist and his voice is still near perfect more than 20 years after he was first “there on your MTV.”