For Long Islanders, Saturday mornings can mean everything from watching cartoons with the kids to mowing the front lawn.

But for residents who speak Italian, like Josephine Maietta, a West Hempstead resident and Sicilian native, it often means tuning in toSouvenir d’Italia, a two-hour Italian-language radio program on Hofstra University’s WRHU that airs at 10am.

“It’s extremely important,” Maietta, who teaches Italian in the Syosset school district, says of the show. “It’s a lifeline. I go to bed on Friday nights and say, ‘I need to put the show on tomorrow morning.’”

Program host Giovanna Auriemma, 54, of Mineola, had no background in radio besides a love of music before beginning the show nearly 25 years ago. Since then, she has grown Souvenir d’Italia from a playlist of Italian pop songs past and present to a full menu of community announcements and interviews.

“We all want to keep our culture alive,” Auriemma says. “We don’t want Italian to die out.”

Still, fluency is not required to appreciate the show. Auriemma, a native of Marigliano, a Neapolitan town, used to speak only a dialect, rather than proper Italian.

“How many [Spanish-speaking] people do I have that listen to my show and just like hearing it,” she says. “I get calls from Americans who say, ‘I don’t understand what you’re saying but I love to listen.’” 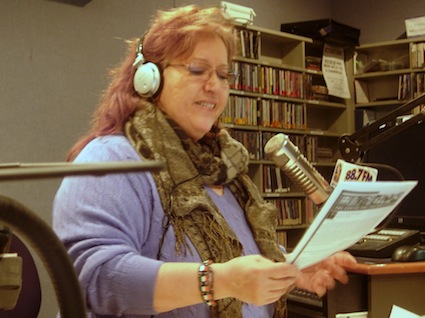 Auriemma in her studio at Hofstra.

Auriemma works as a volunteer, assisted by university students who man the engineering board. On a recent Saturday morning, Amber Leon, a Hofstra senior, was at the controls as Auriemma recited the 88.7 FM station identification in Italian.

“I have no idea what you said, but it sounded good,” Leon said.

While people of different ethnic groups listen to the show, its primary purpose is to inform Italian-Americans of cultural happenings and promote a positive image of Italians, according to Auriemma. She spends much of the show announcing local events, such as the timetable of Catholic masses in Italian, info about immigrant pension services, and news of a New York City visit from Italian President Giorgio Napolitano commemorating the 150th anniversary of Italy’s unification.

“It does allow us direct access to a culture we would otherwise have to access through translation,” says Dr. Anthony J. Tamburri, dean of Queens College’s John D. Calandra Italian American Institute. “And translation, no matter how good it is, is always a filter.”

“She’s very fair with people and gives credit when due,” says listener Lucy Climenti of Elmont. “It’s not only her; she tells about the community.”

When she began the show, Auriemma was shy because of her lack of fluency in proper Italian. But she mastered the language with a boost from listeners.

“I called her and said, you can’t stop! You must continue,” Maietta says. “So we would constantly call her to encourage her.”

Listeners crave the link to Italy that Auriemma provides.

“They need to hear that there are organizations,” Auriemma says of her listeners. “People still keep up the traditions. A lot of people still go to grandma’s on Sunday for pasta and meatballs, and can their tomatoes. We don’t promote the Jersey Shore, that’s for sure.”

Auriemma has watched and participated in the blossoming of Long Island’s Italian-American community since immigrating in 1961 at the age of five. In that time, cultural organizations such as the Sons of Italy andNational Italian American Foundation have grown and scholarship opportunities for Italian-American students have multiplied.

“We need to keep the younger generation involved so we don’t have to worry about losing the language,” Auriemma says.

Auriemma welcomes students who read Italian poems and stories on the air. Tamburri stresses the importance to students.

“[The radio show] has a pedagogical function in that it allows people who are studying Italian to hear real Italian, native Italian, and not ‘textbook Italian,’” he says.

Souvenir d’Italia also supports rising Italian-American musicians. Christopher Macchio got a break singing a cappella on the show and has since performed on a PBS special called Bell’Aria: Celebrating the Italian-American Songbook.

“He does ‘Nessun Dorma’ like nobody else,” Auriemma said, putting the Turandot opera aria, into the queue. 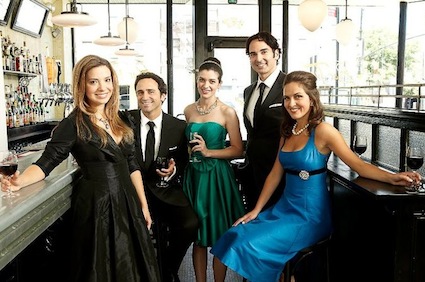 Members of Bell’Aria, with Macchio (second from left).

Singers like Macchio are a part of the reason that the show exists, according to Auriemma.

“It’s just to show what Italians can do,” she said. “That’s our purpose.”