Each spring, youth members of the Young Indian Culture Group prepare a skit to commemorate their yearly graduation, known in Hindi as the Gita Vicara.

The younger children in the group, which draws dozens of families to Herricks Middle School in Albertson every Saturday, perform traditional dances and plays while older students typically create skits that incorporate modern-day social issues. For parents, the Gita Vicara is a chance to see what their children have learned about Indian culture over the course of the year.

Last year, however, one group felt nervous about the topic of their skit: teen pregnancy.

“I played the pregnant teenager and I was really freaked out about it,” says Kripa Bhagat, a 17-year-old senior at Herricks High School. “You have to be fearless because there are judgments about it.”

The teens performing in the skit knew that subjects like sex and abortion were taboo for many Indian families, but they also felt that the culture group provided a safe space for such dialogue.

“Other community groups, you learn the scripture, you learn to chant,” Bhagat says. “Here we discuss it, we apply it.”

The Young Indian Culture Group was founded in 1993 with the mission of preserving Indian heritage and culture, and now counts 250 young people among its members, as well as dozens of parents. The members are mostly first-, second-, or third-generation Indian, but the group is open to anyone interested in culture from the subcontinent. Classes range from $100-550 per individual and run for 30 weeks (see the full schedule here). 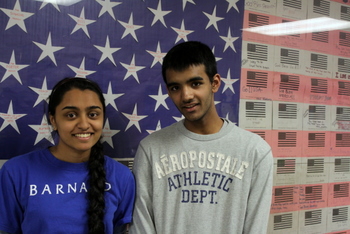 While maintaining the original mission, the goals of the group have changed over time, according to Rathi Raja, the executive director and a founding member. “We were thinking that we basically wanted to preserve our culture, heritage, and values,” she says. “Now, we’ve also become a forum for culture expression.”

The group is built around classes on conversational Hindi, yoga, tabla drumming, and Bollywood dance, but Saturdays at the middle school feel as much like a gathering of family and friends as anything else, with parents and kids hanging around for conversation after the end of formal activities.

And while subjects like Vedic heritage might seem too arcane to hold the attention of children weaned on reality television and caffeinated energy drinks, teachers try to relate the lessons of the scriptures to the suburban lives of the students.

“All these texts were written thousands of years ago, but the lessons that you take from them you can apply to our society today,” says Sanjay Palat, a 17-year-old from Nesconset. “That’s the beauty of it.”

Although the group focuses on providing culture education for young people, it serves parallel generations: While teens play co-ed basketball after classes, mothers chat and fathers indulge in badminton matches.

At times—say, for example, last year’s skit about teen pregnancy—such close proximity can lead to tensions.

“That whole year we were talking about fear and courage,” Raja says. “The reason I wanted to do this was not about teen pregnancy, it was really about not being so fearful to talk about topics that are taboo.”

Raja was in charge of overseeing the skit, and during the preparations and rehearsals, several concerned parents approached her about the content. For a while, she had a hard time finding a student to play the role of the pregnant teen: Most students felt uncomfortable tackling such a controversial topic. 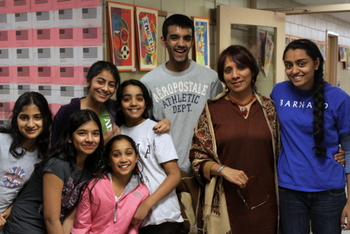 Rathi Raja (second from right) with a crew of group members.

Raja admits that she was as nervous as the performers before the skit. “I go through [periods of] sleepless nights sometimes and that was one of them” she says.

With some trepidation, Kripa Bhagat eventually took the role, and, in the end, the skit struck the right tone with parents. “A lot of people said that they liked it,” Bhagat says. “Especially mothers.”

Now, a year later, Bhagat and the other students in her class are planning this year’s skit. They’ve already considered a performance about gay rights or the repeal of “Don’t Ask, Don’t Tell,” linking the issue to themes from Vedic scriptures.

“I generally like to make the skit a topic where people go away with something to think about,” Raja says. “Especially in our community, people don’t talk, so whether it’s mental health or sexual activity, these are topics that are quite taboo.”