My husband proposed on Valentine’s Day of 2010. As cliché as it sounds, it was our anniversary as boyfriend and girlfriend—to me that made it all the more romantic.

Then came the wedding. I know this will sound strange to many readers, but I was actually kind of dreading it. I wasn’t worried about being married; it was the ceremony itself that made me nervous.

I have Ecuadorian roots and his are Irish and Polish, but both of us felt the same pressure. Many of our acquaintances, family members, and friends wanted us to have your typical Long Island bridezilla extravaganza: limos, pricey food, an army of guests, all-star photographers, exotic flowers. Más que todo: Money, money, money, money.

Instead, we chose an intimate ceremony at City Hall in Manhattan, becoming husband and wife in September of 2010.

Needless to say, we experienced a bit of a backlash. Not only were we defying conventional American culture, we were also breaking away from Ecuadorian and Latino tradition.

As a Latina, weddings are the “Happily Ever After” in all novelas. After strife and obstacles, two people – in front of a priest and inside a church – are finally able to seal their love in the company of family and friends.  Of course, anyone who watches novelas knows that there’s always an evil twin brother lurking in the closet or an amnesia-provoking accident about to happen. So maybe soap operas aren’t the best examples around which to base our lifelong commitments.

For my parents, a wedding was important for other reasons. Growing up in a Latino household, spirituality played a pivotal role within our lives. We would attend Sunday mass every week. My parents were very serious about spirituality, so serious that they chose to wait for us to grow a little older in order to receive our sacraments. That way we would be conscious of what we were doing and appreciate the importance of it. So when my husband and I got married at city hall, they weren’t very happy about the decision. 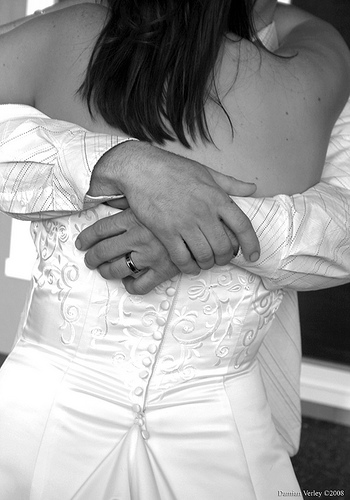 As a second-generation Latina immigrant, I can see the influence of religion on my family, and, by extension, on me. In her article, “Fathering Latina Sexualities,” University of Texas Professor Gloria Gonzalez-Lopez hypothesizes that all Latino cultural traits can be understood through the prism of religion. So it’s not surprising that our families think that we should be getting married in a church, and not in a government office. I can imagine the voice going through my dad’s head: How can a family function without religion?

While I did not want to displease my parents, I also didn’t want to make a decision about this new lifelong commitment solely based on what they wanted. I asked myself what role faith played in my life—values of respect, family, tolerance, and humanism were all things I learned through the influence of religion. When I thought about it, religion had helped shape many of the core principles that I thought should serve as a guideline for starting a family. So when I acknowledged this part of my identity, I thought it made sense to have a spiritual ceremony. And, of course, my parents didn’t forget to remind me.

I spoke with my husband, and he agreed to the ceremony. We both thought that spirituality and religion would be an important foundation for our family, as it had been in mine. I wasn’t choosing a religious ceremony to be “queen for a day” or to have an over-priced celebration; I was embracing being a Latina.

When I explained our plan for a simple ceremony to our parish priest in Babylon, I thought he might be taken aback, since there wouldn’t be any lavish decorations or trappings. Instead, he seemed pleasantly surprised, saying, “That is what a marriage really is.”