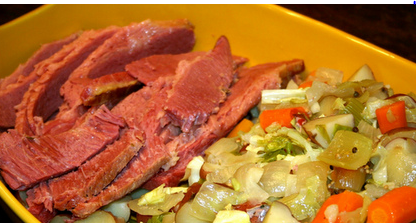 Corned beef and cabbage gets a bad rap. Every year I eat it on St. Patrick’s Day, my feast day, and every year someone tells me “You know that is not really Irish.” What can that phrase possibly mean? Obviously, what is meant is that corned beef is not commonly eaten in Ireland.

There are roughly five million Irish living in Ireland, but 50 million living elsewhere in the world. With most Irish living outside of Ireland, is something only Irish if it originates in Ireland? Does a nation’s diaspora have a hand in a transnational ethnic group’s culture?

This is not an Irish-only issue. The band Los Lobos played recently at The Space in Westbury. Much of their repertoire is influenced by traditional Mexican music, but can any of it be considered Mexican? Chimamanda Ngozi Adichie was born in the United States, moved to her parents native Nigeria where she was raised and educated. Now she lives in the U.S., where she writes about the Nigerian and immigrant experiences. Should we be reminded that she is “not really Nigerian?”

I grew up thinking of bagels as “Jewish food”, but I can’t find any references to it in the Torah. It was a food of the diaspora.

Popular history tells us that it was the interactions between working class Irish and Jewish butchers in New York City that successfully transformed corned beef into an “Irish food.” It is now eaten by many millions more Irish in America on St. Patrick’s Day than all of those non-corned beef eaters who live in Ireland.

So when you eat your corned beef on March 17, be proud in its heritage. It is a symbol of cultural solidarity and identity by a people cast off from its native land by famine and oppression from the land of their ancestry. It is a new cultural tradition, the creation of a vibrant Irish diaspora. And it represents the merging of Jewish and Irish traditions in a country that was not native to either group. Don’t give in to the contempt for immigrants implicit in the claim that that it is “not really Irish” and transcend the veiled antisemitism that may lurk behind the claim.