Another immigrant was elected to the Baseball Hall of Fame this week.

No, not Roberto Alomar—Puerto Rico is part of the US. I’m talking about Bert Blyleven.

Actually, Blyleven is a double immigrant. Originally christened Rik Aalbert Blijleven in Zeist in the Netherlands, his parents immigrated to Canada when he was a toddler and then to California while he was a boy.

Only nine Dutch immigrants have ever played Major League Baseball. Blyleven will be the first Dutch-born player inducted in the Hall of Fame.

He’s also the first player to be blogged into the Hall of Fame. The initial time that he was eligible for the Hall of Fame ballot he only received 17 percent of the votes, while 75 percent are needed for induction.

The following year, his vote totals fell. But sports bloggers, using more accurate statistical markers of pitcher prowess than wins and losses, took up his cause. Just shows the power of the blogs. 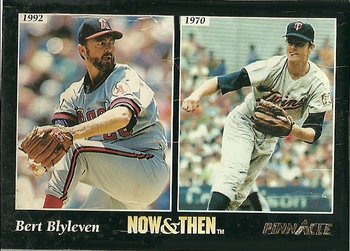