When you’re an international music star in a hugely successful bachata band, you don’t go into hibernation when the group as a whole decides to take a little break.

You keep living your dream – and Henry Santos of Aventura is no different.

Santos released his first single earlier this summer, “Poquito a Poquito” (“Little By Little”), a song that highlights the charismatic Dominican’s playful side as he experiments with the bachata rhythms that have helped his band move into the upper echelon of Latin music artists. On the single – part of his solo debut album – Santos coos in the romantic style of Juan Luis Guerra, and unleashes a rhyming wordplay that borders on inimitable.

On August 16, the 31-year-old Dominican-born, Upper Manhattan-bred artist brought his celebrity to La Cabaña Restaurant in Brentwood, where there was a secret meet and greet with the winners of a radio contest by La Fiesta 98.5. As we waited, you could feel the excitement among Aventura aficionados as they chatted over Quisqueyan dishes like arroz moro and carne guisada.

Santos arrived at the restaurant flashing a megawatt smile and an aura of cool that was heightened by a pair of stylish designer shades. Despite exuding the confidence of Latin music royalty, he wasn’t pretentious: He went over to each of the fans and graciously greeted them with the ease of a familiar friend. 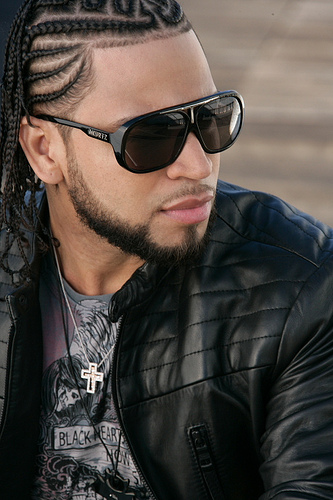 I didn’t have much time to speak with Santos, but I learned that he doesn’t take himself too seriously, except when it comes to his passion for music. He said that he wants his songs to transport people into a fantasy realm of his creation: “Welcome to my sexy kingdom, it doesn’t matter if you don’t look sexy, but you need to feel sexy when you’re at my party.”

During our brief interview, Santos likened his songwriting to his other passion: cooking.

“I compare everything to food and it can carry the same elements,” he said. “But when you cook it a little different, you’re going to catch a different flavor – bachata with Henry’s flavor.”

Listen to “Poquito a Poquito” here: