Islam is often viewed as an inherently violent and intolerant world religion. This misconception is fueled in part by the miscreant deeds of some Muslims, particularly toward those of other faith beliefs.

That conduct is then unfairly imputed to Islamic doctrine and coreligionists globally.

The imputation is unfair because the individual Muslim’s action may not in fact be supported by informed readings of Islamic legal strictures, nor necessarily be representative of the 2.2 billion Muslims in the world.

This is especially true of violence against religious minorities in Muslim-majority countries, like Egypt or in any country, period.

Discrimination, oppression and/or violence against an individual or group based upon religious affiliation—or no affiliation—is fundamentally wrong no matter how you look at it.

This is particularly so from an Islamic perspective.

The Quran is Islam’s foundational text regarded by Muslims as the literal word of God. It constitutes a primary source informing Islamic law. And it articulates several significant principles regarding inter-religious harmony, peaceful co-existence and religious pluralistic success.

First, the Quran asserts that monotheistic religions derive from the Divine: “The same religion He has established for you is as that which He enjoined on Noah—and what We now reveal to you—and enjoined on Abraham, Moses, Jesus, saying, ‘Establish the religion and do not become divided therein’” (42:13).

Thus, the Quran makes the belief in all the prophets—from Adam to Noah to Abraham to Moses to Jesus—incumbent upon Muslims. All those prophets should be respected, as should their followers.

Indeed, Islam prohibits oppression in all of its ugly forms, irrespective of the faith, gender, race or economic status of the victim or perpetrator. The Quran instructs, “Help one another in benevolence and piety, and help not one another in sin and transgression” (5:2).

As such, Muslims are spiritually prohibited from oppressing the adherents of other faith groups. Thus, killings, mutilation, burnings, discrimination and violence against minority religious communities by Muslims is wrong.

Next, Islamic doctrine provides for religious freedom. The Quran states, “Let there be no compulsion in religion” (2:256) and “Will you then compel mankind, against their will, to believe?” (10:99). 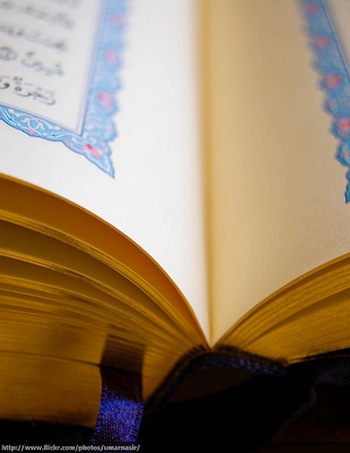 In Islamic legal tradition, humankind has free will to exercise choice, including religious decisions. God is believed to be the sole arbiter of religious differences. This is true even in the case of conversion from Islam. A number of Islamic scholars have found that Muslims are free to leave the fold of Islam without suffering retribution for doing so. Capital punishment, the penalty often meted out to such converts, is reserved by Islamic law for the crime of treason and not conversion, they hold.

Finally, Islam mandates Muslim preservation of all places of divine worship: “For had it not been for God’s checking some men by means of others, monasteries, churches, synagogues, and mosques, wherein the name of God is often mentioned, would have been destroyed” (22:40).