I have always identified as an American. I was born in America to naturalized U.S. citizens. This is the only country I’ve ever called home.

But I recently experienced something that made me appreciate my citizenship just a little bit more.

Katya, my wife, is an immigrant from Russia. She came to the United States for a better life and to pursue her dreams, just like my parents did before her and just like all immigrants have always done. She is now one step closer to her goals.

Along the way there were many difficult moments. There was a lot of waiting and uncertainty involved in her path to citizenship. After sending in each application, it can take several months just to get acknowledgement from the United States Citizenship and Immigration Services that they received it. You don’t know whether to be worried that the documents were lost in the mail, or to be worried that there was a problem with the application.

It was a long and stressful process, one that took more than four years and cost thousands of dollars in application fees, but now it’s finally done. 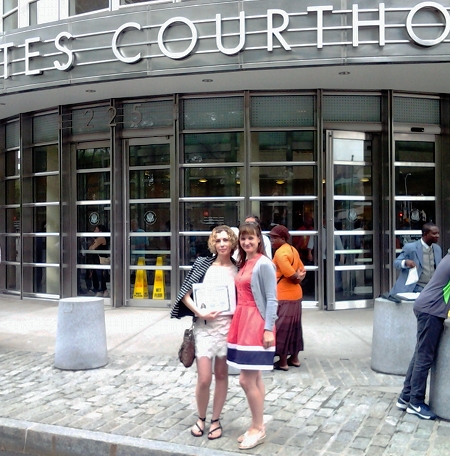 Katya, left, outside the court with her naturalization certificate and cousin Sasha, right

While I was very excited about my wife receiving U.S. citizenship, I didn’t know just how much I would be moved watching her oath ceremony.

Performing the ceremony, which was held at Brooklyn District Court, was Judge Pamela Chen. She told her family’s immigration story, and spoke about how her parents came to the United States from China in the 1930s to pursue a better life, just like my parents did in the late 1970s.

She also told us the history of a mural that was displayed in the courtroom entitled “The Role of the Immigrant in the Industrial Development in America,” which depicts hard working Chinese, Italian, Greek and German immigrants building railroads, harvesting wood and digging mines.

It was originally displayed at Ellis Island as a greeting to newly arriving immigrants. But in 1954, when the island was closed as an immigration center, the mural fell into disrepair and was taken down to be destroyed. Because the mural was government property, a court hearing had to be held to decide its fate. However, the presiding judge at the hearing said that the mural reminded him of his own parents, who were immigrants. He ordered that the mural be restored.

Shortly after, Judge Chen led my wife along with her fellow new Americans through the Naturalization Oath and the Pledge of Allegiance. As the words were being recited, I thought about the millions of people from all around the world that came before us who went through this same ceremony.

Judge Chen reiterated to everyone that the United States is a nation of immigrants, and that while they should embrace their new country, they should also be proud of where they came from and to make sure they pass down their unique cultures and traditions.

Judge Chen’s words touched me in a way that I never could have imagined. I thought I was there to support my wife. I had no idea that I would walk away from it prouder than ever to be a U.S. citizen.