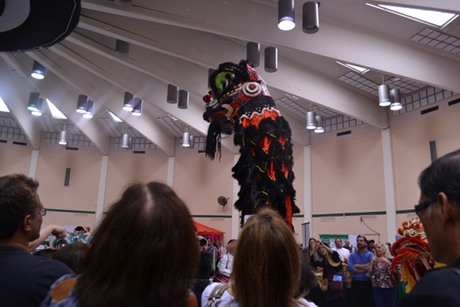 Following the dance, a parade featuring all of the day’s performers passed through center stage, with everyone cheering and showing pride for their beloved countries.

A crowd of more than 1,500 took part in the 7th Annual Multinational Cultural Festival, which embraces and celebrates the many different dance, costume and culinary arts of countries around the world. The nations featured included China, Guyana, Haiti, India, Italy, Jamaica, Japan, Korea, the Philippines, Spain, Taiwan, Thailand, Turkey and several from Latin America.

The children’s workshops not only delighted the kids in attendance, but youth of all ages, as they created Taiwanese snake lanterns, Japanese origami and Philippine flower painting, which uses vegetables as brushes. 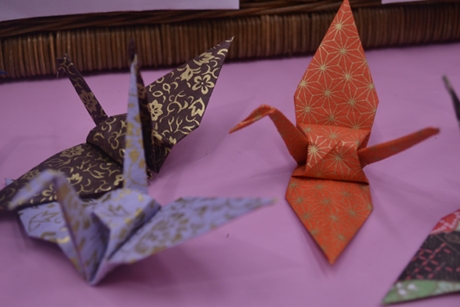 This year’s event saw a change in name as well as the cultures and countries represented. The switch from the Asian-American Festival to the Multinational Cultural Festival was a decision made by the organizers of the event in an effort to better represent the cultural diversity here on Long Island.

Karen Bomzer, one of the organizers of the festival and founder of the Asian-American Cultural Circle of Unity, spoke more to this in an interview:

Q: How did the very first Asian-American Festival come about?
A: We initially wanted to bring together many of the Asian cultures here on Long Island, as they have a unique cultural heritage.

Q: I understand that it is now called the Multinational Festival, what caused the change?
A: We recognized that we were excluding some wonderful cultures people weren’t familiar with. Why limit it? Why not let all of the cultures be showcased?

Q: Why do you feel it is important to have events like this?
A: To end stereotypes that people have about certain cultures. We need to unify, not resent one another. It doesn’t make you any less American to learn about different cultures. 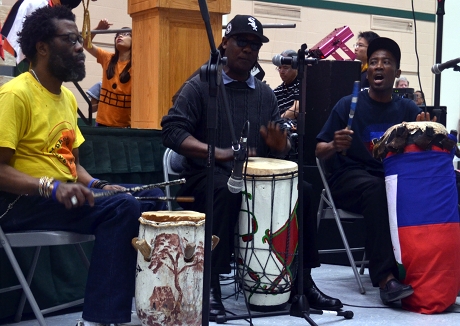 The performers from Haiti danced to the beat of three rhythmic drummers. I was thrilled to have the chance to visually capture their performances as well as those from many other cultures.

I made sure to stop by all of the decorative booths, spending a little extra time at the tables for Haiti, China and Taiwan. I wanted to know more about their cultures and why they felt it was important to have events like these on Long Island.

One of the dancers was Amanda Mulea, who shared with me her passion for Haitian dancing after performing:

Q: What does it feel like to perform in front of an audience?
A: It’s just wonderful and it’s great here because it’s several different countries performing together. So it’s fun, it’s exciting.

Q: What do you hope people will take with them by watching your performance?
A: I hope they get that Haiti is very fun. There are a lot of hardships that happen there and I think that’s what gets focused on in the media, but there is also a lot of celebration. The dance that we did today is called “Rara” and it’s what they do in Carnival. It’s very uplifting and happy and colorful so it’s not always just about the depressing stuff.

Also at the Haitian booth was Clorraine St. Cyr, designer of Wee Body Dolls, who spoke with me about her unique creations: 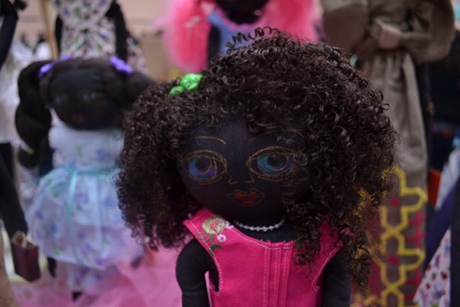 Q: What is the story behind these dolls?
A: If we look overall in America, there are not too many ethnic colored dolls available and I wanted to create something that is beautiful, that represents black, and that people will love. That is why I made the dolls a very dark color, but I don’t want you to look at just the color, beauty is within any color. When I was growing up, little dolls weren’t affordable for us, so our family would make the dolls out of clothing or articles that we would have and create them. Sometimes out of corn husk or any clothing that you had left over.

Q: Why do you feel it is important to have events like these?
A: What I am loving is that everybody is coming around to each table, whatever the culture may be and they are appreciating other people’s artistry. It’s a beautiful thing to see because we are a melting pot world and for us to blend together like this, we get a chance to understand someone else without scrutinizing different little idiosyncrasies that you might have about a certain style or person. I think you are going to walk out of here with a better appreciation overall of every country that you probably never even thought about. I see so many things I want to embrace.

Also of much interest was the Chinese section of the event. Sally Feng Fader is a Chinese immigrant Sumi artist, who created works of art right before our eyes: 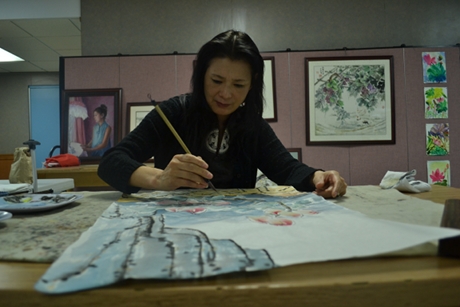 Q: What inspired you to do this kind of work?
A: My father was a calligrapher and painter, so I was very familiar with art when I was young. Unfortunately, I grew up in the Cultural Revolution, and it was a period of time when culture was not important, so a lot of the books and art were burned. After the Cultural Revolution, college was again open for everyone and I was lucky enough to be accepted into art school in Beijing. I continued my education there for the next four years.

When Feng came to the United States, she studied Fashion Design at the Fashion Institute of Technology. Feng now teaches children how to paint and owns an art studio in Floral Park.

Q: Why do you feel it is important to have events like these?
A: I try to do as much as I can to introduce the Sumi watercolor art form, it’s an Eastern art that many people don’t know about. It’s important for us as Americans to learn from each other and from other cultures.

Theresa Wong is a Taiwanese Tea Master at Fancy Gourmet Tea, and she spoke to me about the tea drinking tradition: 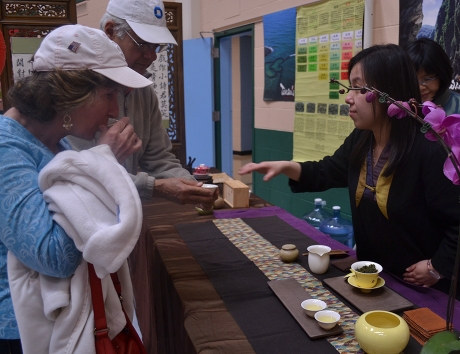 I asked Theresa, “Why is tea drank from small cups?” Wong explained that tea produces a different taste in small cups. It is also tradition to smell the cup after drinking, because the aroma lingers. If you were drinking from a larger teacup, the smell wouldn’t stay.

Errol G. Hinds, Hicksville Chamber of Commerce on the overall experience at the event:

Q: Were you able to watch the performances?
A: Yes, it’s awesome and it’s powerful to see all the celebrations that we get from each country celebrating their ethnic background. We are able to see a lot that I didn’t even know existed.