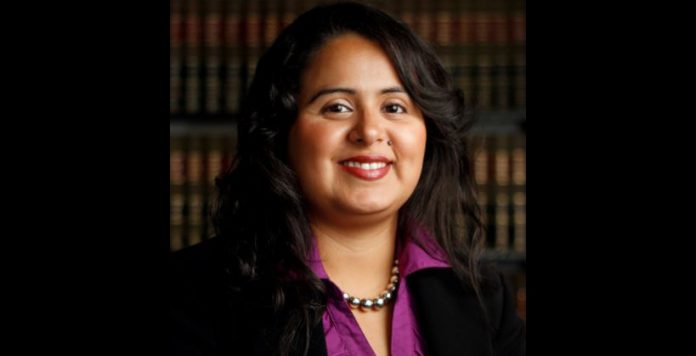 Gabriela Castillo immigrated to the United States from El Salvador when she was just 5 years old. Her native country was embroiled in a bloody civil war, and her father, a college student, believed that his life was in danger. As conditions deteriorated, her family fled to the U.S. Her parents came four years before their children.

Castillo arrived in New York in July of 1985.

“The giant buildings were amazing,” she recalled, but when fireworks were fired on the night of July 4, she hid in terror, worried that she was back in a war zone. Hearing the explosions was “traumatic” for the little girl. Because she had been previously separated from her parents for four years, Gabbie remembers clinging to her mother and not letting her leave the room without her. The pain of family separation and civil conflict still has a place in her heart.

Over the next several years, Gabbie’s family was involved in the complicated process of obtaining permanent residence. Gabbie was fascinated by the work their immigration lawyer did to help the family.

“I decided as a child that I wanted to do what she did,” she said of what became her career choice.

Gabbie said “as I got older and realized how difficult the immigration system is, I realized how important an immigration lawyer is to his or her client.” After graduating from Molloy College, she attended Touro Law School so that she could stay a part of the Long Island community that she had grown to know so well while studying immigration law.

After law school, Gabbie took a job in North Carolina where she worked with unaccompanied children and other immigrants. In 2013, she moved back to Long Island to work with SEPA Mujer, an immigrant women’s empowerment organization originally founded at CARECEN. Soon thereafter, Gabbie became the director of the Long island Civic Engagement Table.

“As an immigration lawyer, I felt frustrated that in many cases I could not offer hope. By working to get immigrants more involved in the political process, I could press for new policies to help them,” she said.

She worried that “the immigrant voice on Long Island has never been elevated to the level that it should be.” Working in immigrant leadership development, voter registration, and community education helped to lift immigrant voices.

Earlier this year, Gabbie was named the director of the Nassau County Coordinated Agency for Spanish Americans (CASA). For the last eight years, CASA had been virtually invisible in county affairs. Gabbie has resolved to make it a “true liaison” between government and the growing immigrant community of Nassau.