Franz Sigel emerged from the March 1862 Pea Ridge campaign with a national reputation among German Americans. Although his military career had been restricted to Missouri and Arkansas, his “brilliant” career was a hot topic in immigrant homes everywhere.1

For example, when a German school teacher in Philadelphia wrote to his parents in Germany he used some of the precious space in his letter to tell them that “the Germans are always the ones who…fight the best.” He added that “the bravest fighter of all is…Sigel.” 2

In the late Spring, Sigel was transferred to the East, the main theatre of war.  He arrived soon after Confederate General Stonewall Jackson had embarrassed Union commander John C. Fremont in the Shenandoah Valley of Virginia. A division of Freemont’s German troops had suffered greatly in the campaign, having been starved by the Union supply system and badly handled by their commanders. Sigel was placed in command of these demoralized Germans as well as some native-born regiments. They were organized into a corps of 12,000 men that would eventually form the framework of the “German” XI Corps.3

If Lincoln’s intent was to bring Sigel to Virginia to revive German support for the war in the East, he succeeded. German American General Carl Schurz saw the reaction of his men to their new corps commander:

The German-American troops welcomed Sigel with great enthusiasm, which the rank and file of the native American regiments at least seemed to share. He brought a splendid military reputation with him. He had bravely fought for liberty in Germany, and conducted there the last operations of the revolutionary army in 1849. He had been one of the foremost to organize and lead that force of armed men, mostly Germans, that seemed suddenly to spring out of the pavements of St. Louis, and whose prompt action saved that city and the State of Missouri to the Union. On various fields, especially at Pea Ridge, he had distinguished himself by personal gallantry as well as by skillful leadership. The popular war-cry, “fighting mit Sigel,” had given his name an extraordinary vogue.4

Sigel’s Corps was placed in a newly organized army under Major General John Pope. The two men did not like each other. The prejudiced Pope saw Sigel as incompatible “with his fellow officers of the Regular army.” Even though Sigel had been a professional military man in Europe, he would always be viewed as a “political general” by the West Point fraternity that included Pope and General in Chief Henry Halleck.5 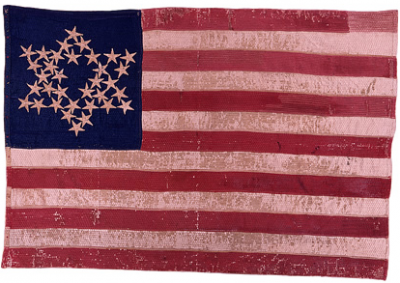 This was the flag of Company H of the 119th New York Volunteers. The regiment was made up mainly of Germans and it had companies with names like “The Sigel Life Guards” and “Sigel’s Sharpshooters”. Company H was a non-German company recruited on Long Island. The flag was “made by women from Hempstead, Long Island and reportedly received by Company H in the fall of 1862 while on duty near Washington, D.C., this silk national flag includes 34 appliquéd stars in the canton. The stars are arranged in a star pattern sometimes referred to as the “Great Luminary Pattern.” In the late 1930’s the flag was “restored” by Mrs. Katherine Fowler Richie using a technique patented by her mother Mrs. Amelia Fowler, the woman who treated the Star Spangled Banner,” according to the New York State Military Museum.

Months of hard marching and bloody fighting did not diminish the trust his men had in Sigel. In September 1862, Albert Kraus, a German immigrant from Buffalo in the German 116th New York Volunteers bragged to his parents that he was “under the command of the best general in the North, the German General Siegel [Sigel].” He told them that “half the men are Germans, and they are in the best fighting spirits.” Within 9 months, that “fighting spirit” of loyal Germans would be mocked by many in the North.7