George B. McClellan commanded the Union’s Army of the Potomac. His victory at the Battle of Antietam made Lincoln’s issuance of the Preliminary Emancipation Proclamation possible. McClellan was a Democrat who fought his war against Confederate armies, but he refused to fight a “hard war” against Southern civilians and he opposed using the army to end slavery. His constant fights with the Lincoln administration, his slowness in following-up his Antietam victory, and his conservative politics led to his dismissal after the 1862 Congressional elections. McClellan’s battlefield victory helped create the conditions necessary for his own removal.1

McClellan would be missed by many soldiers, but his departure was particularly traumatic for the men of the Irish Brigade. According to one immigrant veteran, McClellan “was a great favorite” of the Brigade. McClellan was, recalled one Irish soldier,  “mild and pleasing in manner, and could easily be approached by any of his men.” His successor, Ambrose Burnside, by contrast “had a dark frowning, face,” the same man said, adding that “the common soldier was afraid to approach him.” The news that Burnside was in and McClellan was out “was indeed a sad and heavy blow,” he reported.2 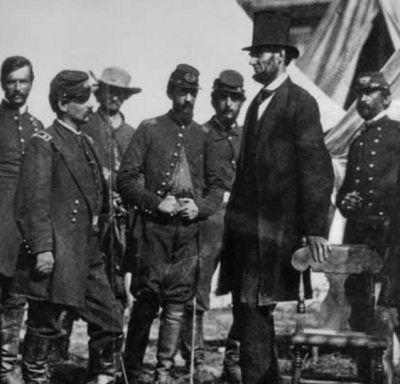 George McClellan (left) and Abraham Lincoln sqaure off after Antietam.

Irish soldiers were likely to see McClellan as a fellow Democrat deposed by jealous Republicans. McClellan’s caution in battle seemed like a virtue to common soldiers who felt that it indicated that he wanted to preserve their lives as much as he wanted to preserve the Union. They also saw him as an advocate for their interests, insisting that his men be well-fed and well-supplied. His limited war aims were applauded by some of them as more likely to lead to an early reconciliation with the South and an end to the war. A soldier recalled after the war that when McClellan’s farewell address was read to the Irish Brigade “It created…universal feelings of the most profound sorrow, sadness, and gloom.”3

On Nov. 11 the Army of the Potomac was drawn up to say farewell to McClellan. “Cheer upon cheer rent the air as he bid us goodbye with…cap in hand” wrote Private William McCarter of the Irish Brigade. After McClellan passed by and the Irish Brigade was ordered back to camp “The return march bore more resemblance to…a soldier’s funeral…. All appeared dejected, lonely, and lost,” McCarter recalled. He wrote that “In losing General McClellan, the Army of the Potomac lost its best commander [and] the common soldier lost his best and most faithful army friend.”4

Feelings in the Irish Brigade ran so high that several officers resigned. The Brigade’s commander Thomas Francis Meagher refused to accept the resignations, saying the Irish had enlisted in support of a cause, not in loyalty to a single man. This did not mean that General Meagher agreed with the firing. A letter from him that was published in the New York papers branded the removal as criminal and said it would not be forgiven by the army.5