Although Ireland is one of the smallest countries in Europe, Irish Americans form the third largest ethnic group in the United States. Since most “Irish Americans” are in fact of mixed ancestry, the question of why so many choose to identify as Irish arises. One answer, according to sociologists, is St. Patrick’s Day.

St. Patrick’s Day is now one of the largest celebrations of any kind in the United States and its only rival among ethnic festivals is Cinco de Mayo. Many Americans discover their “Irishness” on March 17.

Irish Americans have actively promoted the public celebration of their saint’s day since the late 1700s as a sign of ethnic solidarity and for the promotion of an Irish American identity distinct from the dominant Anglo Saxon culture. Dinners, dances, and parades provided ways to invite the native-born to meet the Irish and share in their culture and camaraderie. 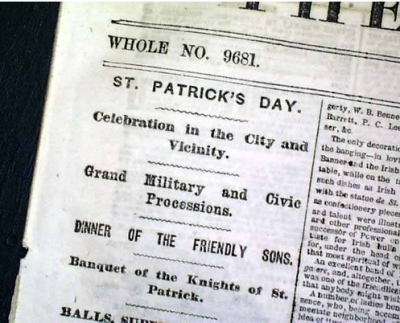 In the 1850s, St. Patrick’s Day parades were often led by Irish militia units as a warning to Know Nothing militants that disciplined and armed men stood ready to defend the immigrant community. The first unit in New York’s modern St. Patrick’s day Parade is still the old Fighting 69th which formed the core of the Irish Brigade. Massive parades also put politicians on notice that the immigrants who marched on St. Patrick’s Day would be voting in the fall.

The men of the Irish Brigade understood the multiple purposes of the celebration. They organized annual festivals on March 17 throughout the war years. St. Patrick’s Day provided an opportunity to improve unit cohesion and maintain the “Irishness” of the Brigade. Other Irish units were invited to join in the party, cementing the Irish Brigade’s leading role in military Irish America. Non-Irish units and most of the high ranking officers in the Army of the Potomac also were guests at the feast. This sharing eased tensions between the native-born and the once despised immigrants. Barriers were broken as men from different backgrounds listened to Irish music, participated in sporting exhibitions, and shared a glass of whiskey together. 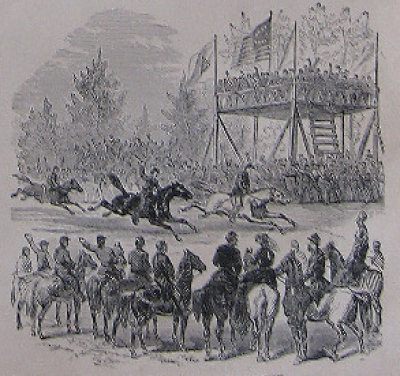 Samuel Clear was not Irish, but he had enlisted in one of the Irish Brigade’s regiments, the 116th Pennsylvania Volunteers. He described one of the annual St. Patrick’s Day celebrations, a rough and tumble affair:

Friday, March 17: St, Patrick’s Day in the morning, and it is a fine morning… This is the day of the “Irish Brigade Jubilee.” I got leave of absence and went back to corps head quarters. We found thousands of troops there and men busy putting the finishing touches to the race track… We found a nice track [there] like a fair ground track, but they had four hurdles built three feet high across the track and a ditch three feet deep… A large platform filled with Officers and about twenty ladies [was there]. Also a good brass band. At ten O’Clock the horses and riders came in. The [Colonel] of the 7th New York Dutch [Germans]led the way on a large black stallion…and then others came an arranged themselves in a line, and then the word was given and away they go. Some went over the hurdles and ditches, some flew the track and ran through the crowd of soldiers.  …The Ambulance was hauling dead and wounded away all day. …Never did I see such a crazy time.1

Video: The Rocky Road to Dublin
This song of Irish migration became popular in the years immediately before the Civil War

1. The Civil War Notebook of Daniel Chisolm Edited by W. Springer Menge et al published by Ballentine Books (1989) pp. 68-69. I note that the diary refers to a German officer from the 7th New York. This regiment, nicknamed the Steuben Guard, was organized in New York City in 1861. It had ceased to exist before the St. Patrick’s Day described, so the diarist might be mistaken or there may have been a remnant of the regiment in another unit.