On January 16, 1863, a solemn Requiem Mass was held for the repose of the souls of the dead of the Irish Brigade at New York’s St. Patrick’s Cathedral. This was not the modern cathedral on Fifth Avenue, it was the old cathedral still standing on Mulberry Street. St. Patrick’s was the capital of Catholic New York and the center of Irish America. During the Know Nothing period it had been attacked by armed anti-immigrant militants and defended by Irish militiamen. This was the locus of a defiant and embattled community, growing in size and power every year during the 1850s and 1860s. 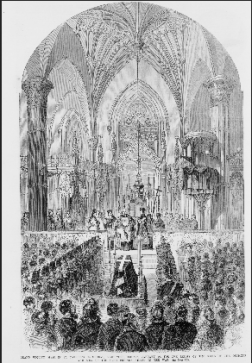 Drawing of the Mass for the Dead of the Irish Brigade.

The symbolic funeral for the men of the Irish Brigade was offered by more than a dozen Catholic priests. The music selected was by Mozart and Rossini and performed by both a pipe organ and an orchestra. The highest dignitaries of Irish New York were present. The honored dead may have attended tiny parish chapels in Irish ghettos in life, but they became immigrant royalty in death. 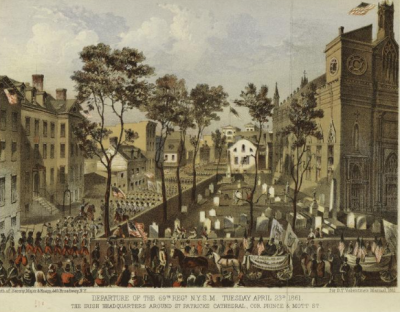 This print shows the 69th New York marching off to war in 1861. On the right can be seen St. Patrick’s Old Cathedral.

The Mass provided the comfort of religion to the grieving families, but it also insured that native-born Americans recognized the sacrifice offered by immigrants on the bloody altar of their adopted nation. The Irish Brigade had become nationally famous and its nearly-suicidal attacks at Antietam and Fredericksburg had elevated an entire ethnicity in the eyes of many Americans. The dignity of the funeral testified that immigrants who had once been suspected of being less than human were in fact men, that their families felt the loss of their beloved soldiers as sharply as anyone, that their despised religion embedded a rich transnational culture, and that they were as fully American as any man born in the United States. 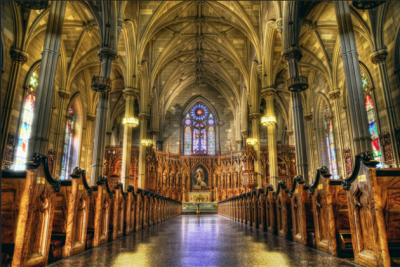 The website Irish in the American Civil War has put up a description of the requiem mass that includes video of some of the music performed.

You can visit St. Patrick’s Old Cathedral in person, or online here.

Video: The Minstrel Boy
This song was brought by Irish immigrants to the United States before the Civil War. About a poet who joins the rebellion against England and who is killed in battle, it is still played today. Modern musicians as diverse as Joe Strummer of the Clash, the Pogues, and the Corrs have recorded it in recent years.

The minstrel boy to the war is gone,
In the ranks of death ye will find him;
His father’s sword he hath girded on,
And his wild harp slung behind him;
“Land of Song!” said the warrior bard,
“Tho’ all the world betray thee,
One sword, at least, thy rights shall guard,
One faithful harp shall praise thee!”

The Minstrel fell! But the foeman’s chain
Could not bring his proud soul under;
The harp he lov’d ne’er spoke again,
For he tore its chords asunder;
And said “No chains shall sully thee,
Thou soul of love and bravery!
Thy songs were made for the pure and free
They shall never sound in slavery!”

This verse was added during the Civil War:

The Minstrel Boy will return we pray
When we hear the news we all will cheer it,
The minstrel boy will return one day,
Torn perhaps in body, not in spirit.
Then may he play on his harp in peace,
In a world such as heaven intended,
For all the bitterness of man must cease,
And ev’ry battle must be ended.

Source:
The Irish Brigade and Its Campaigns by David Power Conyngham pub. by Fordham University Press.