Catholic religious sisters, commonly (and inaccurately) called “nuns”, are a declining part of American life. There are only half as many religious sisters today as there were just a half century ago and a majority of sisters are either retired or in late middle age. This was not the case in mid-19th Century America, where, in the words of the leading historian of nursing sisters, “Catholic nuns were everywhere.” The sisters “ran corporations, dealt with national governments, journeyed on fact-finding missions crossing the country, indeed the world” at a time when most American woman were confined to the “domestic sphere.” 1

Most of these sisters were Irish immigrants.

Although the Irish were among the poorest people in Europe, Irish nurses in Ireland and in the diaspora in Britain, America, and Australia were able to take advantage of the transnational nature of the Catholic world to obtain medical training and organizational ideas. Many Irish nursing sisters trained in France or under Irish women who had trained there. French nuns had established some of the first hospitals in North America and the Irish sisters brought the same organizational zeal when they immigrated to the United States in the 1840s and 1850s.2 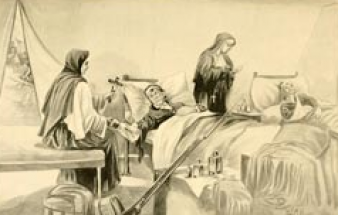 Catholic nuns had been a particular target of the Know Nothings and their anti-immigrant predecessors. The sisters filled public roles not ordinarily allowed to American women and they wore distinctive clothes that made them as noticeable in 19th Century America as traditional Muslim dress does today. The fact that they lived without husbands together in convents led to rumors that they were prostitutes or sex slaves. Organizing schools, orphanages, and hospitals, hiring male professionals to work for their institutions, these immigrant sisters “practiced a radical form of self-assertion through submission to religion,” in the words of their leading historian.3

Nuns founded 299 American hospitals between 1829 and 1900. These ranged the famous, like the Mayo Clinic and New York’s late lamented St. Vincent’s, to working class hospitals in Buffalo, Philadelphia, and Boston. In addition to the hospitals they started, nuns would form the nursing departments of important hospitals like the Baltimore Infirmary, the first university-affiliated teaching hospital in this country.4

When the Civil War broke out, the nursing sisters formed a cadre of trained nursing specialists already organized into disciplined structures. Unlike the upper class women who volunteered briefly as nurses , only to return home after a few months, the sisters did not have family obligations and they expected to nurse for the rest of their lives. The systematic training of sisters as nurses and administrators was “what separated the sisters from the rather motley group of enthusiastic amateur secular nurses” who came forward during the war, according to nursing historian Sioban Nelson.  Nursing pioneer Florence Nightingale understood this,  once saying “What training is there to compare with that of a Catholic nun” to teach a young woman perseverance and organizational skill. Surgeon General Hammond told Lincoln that the secular volunteer nurses organized by Dorothea Dix “cannot compare in efficiency and faithfulness with the Sisters of Charity.”5

600 nursing sisters served during the Civil War. They represented a fifth of all female nurses. Their heroic role was recognized in 1874 when President Ulysses S. Grant insisted that a nursing sister, Mother Josephine of the Dominican sisters, unveil the statue of Lincoln at Springfield, Illinois. In the 20th Century, a monument was erected in Washington to the “Nursing Nuns of the Battlefield.” We will meet more of these sisters in upcoming installments of The Immigrants’ Civil War.6 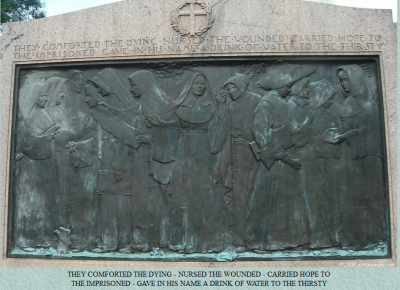 Nuns of the Battlefield Memorial near Du Pont Circle in Washington..