Within days of General Grant’s order expelling all Jews from Kentucky and Tennessee, delegations from Jewish communities began heading to Washington to head off the greatest calamity American Jewry had ever faced. Jews were already being given expulsion orders and a few had been arrested. The explanation one Union general gave to a detainee for his expulsion, “You are Jews…and neither a benefit to the Union or Confederacy,” was not reassuring.1

The modern historian of the expulsion order, Jonathan Sarna, notes that while roughly 100 Jews suffered directly from it, most Union officers either tried to ignore Grant’s directive or defied it. Some of his commanders had Jews in their own units. Were they to expel the Jewish soldiers from the army? Others assumed it was a mistake and asked for clarification before they tried to carry it out. Still other officers thought it a violation of the Constitution.2

The first of the Jewish community leaders to arrive in Washington was Ceasar Kaskel of Kentucky on January 3, 1863. He went to see Congressman John Gurley, known for his close relationships with Jews,  who quickly arranged a meeting with Abraham Lincoln. When Lincoln heard what had happened, he said that the Jews had been driven by Grant from the “happy land of Canaan”, according to Kaskel, and he promised that they would have his “protection…at once.” While there is some doubt as to whether Lincoln actually said this, he quickly ordered his general-in-chief Henry Halleck to countermand the order. Halleck had a hard time believing Grant could have issued it. On January 4 he sent a telegram to Grant that “If such an order has been issued” it was to be rescinded. On January 6, Grant notified his officers that the expulsions should halt.3 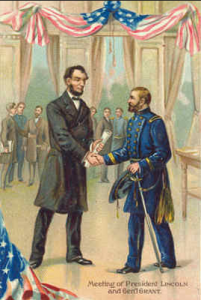 Although Lincoln and Grant would form an effective partnership to win the Civil War, they did not meet in person until March 8, 1864.  Horace Porter, one of Grant’s subordinates, described the first time the two men saw each other at a crowded White House reception: “Although these two historical characters had never met before, Mr. Lincoln recognized the general at once from the pictures he had seen of him. With a face radiant with delight, he advanced rapidly two or three steps toward his distinguished visitor, and cried out: “Why, here is General Grant! Well, this is a great pleasure, I assure you,” at the same time seizing him by the hand, and shaking it for several minutes with a vigor which showed the extreme cordiality of the welcome.”

Kaskel returned to Kentucky before news of the rescission had spread. Challenged by a Union officer about how he was authorized to return after being ordered out, Kaskel told him that he had come back on the authority of the President of the United States.4

Delegations of rabbis and other leaders, who arrived in Washington after the order was countermanded, were brought to meet with Lincoln on the crisis so recently averted. Isaac Mayer Wise wrote of the President a week after the meeting that Lincoln “knows no distinction between Jew and Gentile” and “feels no prejudice against any nationality.” He assured his immigrant readers that Lincoln would not permit discrimination against a citizen “on account of his place of birth or religious confession.”5

While Grant’s order expressed the suspicion of Jews articulated by many former Know Nothings as well as evangelical abolitionists within the new Republican Party, it was rejected both by Democrats and those Republicans who shared Lincoln’s emerging vision of a more inclusive republic. Calls would come for Grant to be sanctioned for this act, calls which Lincoln would ignore. The general was just too good a fighter to lose.
In later years, Grant would wholeheartedly renounce the order and as president he would both promote Jews within his administration and defend Jewish communities when they came under attack abroad. We’ll cover that result of Grant’s expulsion order in the final chapters of The Immigrants’ Civil War.6

Video: Historian Jonathan Sarna on Grant’s Expulsion of the Jews and Grant’s Relationship With the Jewish community After the War

Read Jonathan Sarna’s essay on Grant’s Redemption after the war. Thanks to our reader Jon Morrison for this link.

The leading modern work on the expulsion of the Jews and Grant’s post-war amends is When General Grant Expelled the Jews by Jonathan D. Sarna published by Schocken (2012).