In October 2010, I decided I wanted to see if I could create a series on immigrant involvement in the American Civil War. I was not going to start my own blog on the war as many others have done. Instead, I wanted it published on Long Island Wins, a website for my area’s immigrants and their friends with a readership of around 100,000. This meant that I had to sell the series to the Wins editor Ted Hesson.

Ted is a professional journalist with an advanced degree from Columbia University. He recently moved on to Univision/ABC News. He knows tons more about the field than I ever will.

To my happy surprise Ted was very interested in my four year investigation of the subject. He was concerned that we find a good name for the series that would bring in readers. While I normally let him pick the title of my articles, he’s just better at that than I am, this time I dug in my heels.

I told Ted that I was adamant that the series be called The Immigrants’ Civil War. He asked me why I wouldn’t budge on the name, and I told him that the title had five meanings that were central to what I wanted readers to get out of the series.
The first meaning was the most obvious. The series would look at Immigrants in the Civil War. Anyone stumbling on the title would expect that, right?

I wanted to explore what the war was like for individual immigrant soldiers like Peter Welsh of the Irish Brigade. I wanted to examine how immigrant communities in places like New York, St. Louis, and rural Wisconsin reacted to the sudden loss of hundreds of their men in battle. Mostly, I wanted to tell the stories of men and women whose lives were often invisible to their native-born neighbors.

The fourth “civil war” was the one the Union and Confederate governments fought to win over immigrants. Confederates felt they could count on help from the Irish in the North.  Unionists saw Germans as natural allies in the South. They each fought a civil war for the allegiance of the immigrants.

My final meaning for the title grew out of my desire that the series serve as a way of teaching the Civil War to today’s immigrants. I teach civics for immigrants applying for citizenship and I find that most newcomers have a hard time imagining Americans slaughtering one another by the hundreds of thousands. I hoped the series would help them understand the issues that nearly divided the country as well as the origins of the Fourteenth Amendment, the legal font of modern multiracial America.

I try to answer the questions today’s immigrants have about the immigrants who came here 150 years ago in The Immigrants’ Civil War. They want to know how immigrants were viewed back then, how language and cultural differences were handled, and whether the war changed their positions in society.

This meaning has also influenced my writing style. I try to avoid the sort of military-technical language used on many other Civil War websites. My citizenship students have no idea what a term like enfilade means. I also don’t take for granted that they know who Robert E. Lee was or that Kentucky was a border state not Texas. The series has developed a wide readership all over the United States and at least three quarters of my readers were born here, but I always consider my immigrant readers in researching and creating my articles.

I try to keep all five meanings of The Immigrants’ Civil War in mind whenever I write a new piece.

Thank you for helping sustain this series by reading it and sharing it with your friends. It is my pleasure to write it for you. 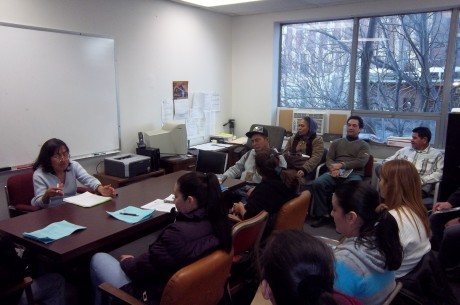