Oscar Romero is my hero.

Every Central American immigrant on Long Island knows the murdered bishop’s name. They know he was killed because he stood by them.

Romero was a working-class boy in one of the poorest countries in the Western Hemisphere. His father was training him to be a carpenter, but Oscar chose the priesthood. Known as bookish, he became the head of El Salvador’s Catholic Church as his country descended into repression and civil war. As priests and nuns and lay people were murdered for their faith, Romero chose the dangerous path of walking with the poor. In so doing, he became one of the greatest religious figures of the last century.

Archbishop Romero was killed 32 years ago when he asked the United States to stop supporting the terrorists who ruled his country, but his words on faith and service deserve to be better known. On Long Island, we have tens of thousands of Salvadoran refugees and their children here. We should recall that they are Oscar Romero’s brothers and sisters; they are the people he loved so much that he laid his life down for them. 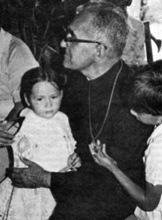 If you are Salvadoran, you already know what San Romero de las Americas said, but for my US-born countrymen and women, I offer a few quotes from his sermons and interviews:

“We must not seek the child Jesus in the pretty figures of our Christmas cribs. We must seek him among the undernourished children who have gone to bed at night with nothing to eat.”

In his last sermon, Archbishop Romero spoke of working with the poor:

“Those who surrender to the service of the poor through love of Christ, will live like the grains of wheat that dies. It only apparently dies. If it were not to die, it would remain a solitary grain. The harvest comes because of the grain that dies. We know that every effort to improve society, above all when society is so full of injustice and sin, is an effort that God blesses.”

A few minutes after he said this, an assassin shot and killed Romero during the offertory, the part of the Mass where the bread and wine are brought to the altar. On March 24, the anniversary of his martyrdom, say a prayer of hope for his people in El Salvador and here in the United States.