When Irish immigrant Henry Sweeney finally received his long-sought-after promotion to the rank of captain in 1863, it was to command Black troops from Iowa, a state that had tried to prevent free African Americans from even moving there.1

In 1838, Iowa’s Territorial Legislature voted to enact a law depriving African Americans of the most basic civil rights. A majority of the state’s legislators had been born in Southern states that enslaved blacks, but some Northern-born members also supported restrictions on black rights. Iowa’s new “Black Code” barred non-whites from voting, going to public schools, serving on a jury, and testifying in court. The following year a law was passed declaring invalid all marriages between blacks and whites. In 1851, the state legislature went even further. It passed a law barring free Blacks from entering Iowa. The state’s position as the West’s most racist government only began to change in the mid-1850s when anti-slavery Free Soilers and Republicans gained power in the statehouse.2

Iowa’s racist legislation was effective at discouraging African American settlement in the Hawkeye State. At the time the Civil War began, Iowa was the whitest state in the Union. Out of 674,913 people living in Iowa, only 1,069 were Blacks. Only one out of every six-hundred and seventy people was of African descent. This would soon change. When the war broke out in 1861, slaves escaping from Missouri began making their way north into Iowa. Over the next ten years Iowa’s Black population grew by more than 500%.3

A year after Fort Sumter was attacked in April 1861, a leader of the state’s Black community volunteered to raise a company of African American soldiers to fight for the cause of the Union. The governor ignored the offer. It was only after black troops from other states had proved their value on the battlefield in 1863 that Iowa began to recruit them into a segregated all-black regiment. The fact that every black man who enlisted relieved the state of the burden of drafting a white man to fill a Federally-imposed quota also contributed to the change of heart.4

The problem for recruiters, of course, was that with only about five hundred black Iowan men living in the state, filling a thousand-man regiment would seem to be mathematically impossible. Iowa Governor Samuel Kirkwood recruited heavily among the once-despised escaped-slave refugees from Missouri who had sought shelter in Iowa after the war began. He also authorized the recruitment of black soldiers in the slave-state of Missouri. Four of Iowa’s eleven black companies of approximately one hundred men each were actually formed in St. Louis, Missouri. In all, a majority of the men in this Iowa regiment had come from Missouri.5

Milton Howard was one of the small number of black Iowans recruited. He had lived in Iowa as a child, but he was kidnapped by slave catchers while still a boy and sold as a slave in Alabama. In the chaos of war, he escaped from his enslavers and made his way back to Iowa. He enlisted in the new Black Iowa regiment. Military service would give him a chance to strike a blow against slavery, but even in what was becoming an army of liberation, he would not be treated as an equal to a white man.6

Black soldiers would only be paid $10 dollars per month, three dollars of which was deducted for their clothing, while white soldiers made $13. Black soldiers were subject to being killed as insurrectionaries if captured by the Confederates or of being sold by them into slavery. African Americans also could not serve as officers in the regiment. This bar on black officers would cause serious problems beyond the invidious discrimination itself. When a Black regiment lost a white officer in battle, he could not be replaced by a Black sergeant promoted from the ranks. The regiment would have to wait months for the Bureau of Colored Troops to send a replacement.7 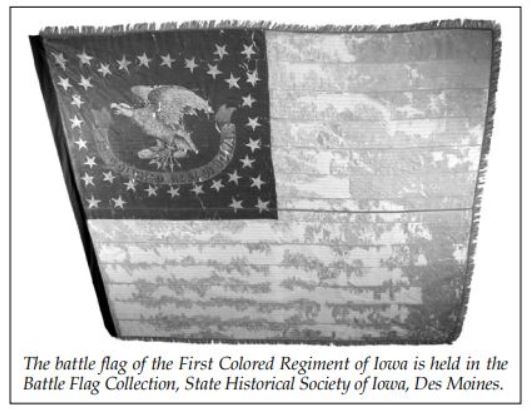 In October, 1863, Henry Sweeney joined his new regiment. He was one of the 7,000 white men who officered the new Black regiments formed throughout the country. Sweeney faced some of the same discrimination as his men. USCT officers sometimes endured derision from racist white soldiers in their own army. They also risked being executed if captured by the Confederates as men who had incited slaves to insurrection.8

The regiment, variously called the First Iowa Volunteers of African Descent and the First Regiment of Iowa African Infantry, was renamed the 60th United States Colored Troops (“60th USCT). Captain Sweeney was given command of Company G of the new regiment.9

The men Sweeney commanded came from just about everywhere other than Iowa. Nearly all were from slave states. John Hammond, recruited in St. Louis, was born in Kentucky. Eighteen year old Jasper Harris was from Missouri. Jacob Harvey was a native of Virginia. The vast majority were born in either Virginia or Missouri.10

The Irish captain was not the only immigrant in his company. Sweeney’s First Lieutenant Charles Hoffman was a twenty-year old German immigrant who lived in the German enclave of St. Louis.  The St. Louis Germans had been intensely opposed to slavery before the war, and they were loud voices calling for emancipation and for the enlistment of African Americans into the army from the first months of the war.11

In December, 1863, Sweeney and the 60th USCT were sent south along the Mississippi River to Helena, Arkansas. The small city had been in Union hands for a year, but it had been threatened by a Confederate army as recently as in July. The 60th was to serve as part of an army of occupation of a barely subdued rebel region.12

The 60th USCT fought in only one small battle during the Civil War, the Battle of Big Creek. The regiment’s men, however, skirmished with Confederate guerrillas, guarded supplies and provided security for the thousands of black refugees who crowded into Helena during the war. Captain Sweeney’s Company G finished the construction of Battery C, a fortification with large artillery pieces to protect Helena from an attack by a Confederate land forces. Like many black regiments, the 60th was often called upon to do the backbreaking work of constructing forts and strongpoints that white soldiers did not want to do.13

By 1865, Henry Sweeney had become involved in the protection and relief of the black refugees at Helena. When most of the regiment marched off toward the state capital at Little Rock in March 1865, Sweeney remained behind to organize the newly created Bureau of Refugees, Freedmen and Abandoned Lands office in Helena. Known more simply as The Freedmen’s Bureau, the Bureau was a vital lifeline from the Federal government to African American Arkansans. Sweeney would give the next three years of his life to the defense of freed former slaves through his work with the Freedmen’s Bureau. In an April 12, 1865 letter, written after Sweeney had begun his work with the Freedmen, Lt. Col Gardiner A. A. Deane of the 60th USCT described Sweeney in a letter as “a man of exceptional character.” He would need that “exceptional character” in his future confrontations with expropriated slave owners, ex-Confederates, and the Ku Klux Klan.14