Jews and the Civil War: A Reader
Edited by Jonathan Sarna and Adam Mendelsohn
NYU Press (2010)

This year marks the 150th anniversary of the start of the American Civil War. You’ll be seeing a lot on the war over the next four years, so get used to it now.  In fact, with arguments over states’ rights, race relations, and the 14th Amendment, you may feel like the war is still being fought.

One of the most neglected aspects of the war is the role of immigrants in it. We have some vague notions of the Irish Brigade and the New York Draft riots, but beyond Leo DiCaprio’s role as an Irish thug in Gangs of New York, few of us can recall even pop cultural images of immigrants in Blue or Grey.

Jews and the Civil War: A Reader is one of several new contributions to the subject of the immigrant experience during the war. And the Jews were overwhelmingly immigrants. Two-thirds of Jews in America in 1861 had been born abroad. 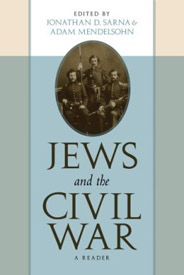 The study of Jews in this era only dates back sixty years. The publication of Rabbi Bertram Wallace Korn’s scholarly study American Jewry and the Civil War in 1951 is the seminal work on the subject. This modern reader collects scholarship subsequent to Korn.

Before Korn, Jewish writing on the Civil War depicted Jews as sharing the views of the Christian communities in which they lived—just like everyone else, only more so. Such writing was intended to counter anti-Semitic notions that Jews constitute a subversive Fifth Column within host societies.

As a result, early writing depicted Jews in the South as good states’ rights advocates, kind slave owners, reasonable secessionists, and brave Confederate soldiers whose uprightness was universally recognized by their neighbors.

In the more modern works of Korn and his successors, the depictions of Jews in the Civil War has changed to include complex interactions of Jewish identity, limited English proficiency (most spoke German), and Judeophobia in the Christian community on individual Jews and Jewish communities.

Not all of the stories end the way pre-Korn writers would have wished. Some of the Jews whose lives are detailed here fit in so well in the broader society that they abandoned their Jewishness altogether and converted to Protestant Christianity. Others were among the Jews expelled from their homes by Ulysses S. Grant during his Vicksburg campaign – seen as an inherently untrustworthy element.

Over the next several years, I plan on blogging about the Immigrants’ Civil War. I will avoid the temptation to only look at the heroic, enlightened, and noble immigrants, but also at the realities of social confusion in a society torn apart by war. Jews and the Civil War is a great contribution to that research.