When Colonel Hans Christian Heg took time during the early stages of the Battle of Chickamauga to write to his wife Gunhild on September 18, 1863, he already knew that the fight the next day was going to be perilous. “The Rebels are in our front,” he wrote, and if they decided to fight a battle it was apt to be “a big one.” He told his wife not to feel “uneasy for me.” He wrote that he was “well and in good spirits and trusting to my usual good luck.” Then he made contradictory claims about how he hoped to behave the next day, saying; “I shall use all the caution and courage I am capable of… .”1

Colonel Heg was a Norwegian immigrant who had arrived in the United States as a boy of eleven, and settled in a Norwegian colony in the frontier state of Wisconsin.  Heg’s family became involved in publishing one of the first Norwegian-language newspapers in the country when he was eighteen. The paper adopted the radically anti-slavery motto of “Free Land, Free Speech, Free Labor, and Free Men.”2

After a stint as a gold prospector in California, Heg became a young community leader and anti-slavery activist back in Wisconsin. He joined the new anti-slavery Republican Party in the late 1850s. Although many Norwegians were mistrustful of the Know Nothing backgrounds of some leading members of the party, the Wisconsin branch adopted a strict anti-nativist platform and Heg was nominated by the Republicans for statewide office. Heg believed that he received the nomination because the Republicans hoped to court the growing Scandinavian vote and he campaigned aggressively in Swedish, Norwegian, and Danish communities. In his appearances he took on the issue of secret Know Nothingism in the Republican Party and he assured his fellow immigrants that they were welcome within it. Two years before the Civil War began, Heg became the first Norwegian immigrant elected to statewide office in the United States.3 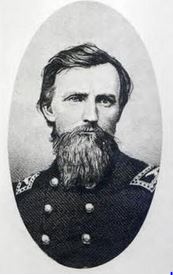 When the Civil War broke out, Heg led the effort to recruit the Norwegian regiment which became the 15th Wisconsin Volunteer Infantry. Heg appealed to “Norsemen” to come to the aid of their “adopted country,” while being able to speak their native language and maintain their old customs, in a regiment that was both fully American and distinctly Norwegian. He warned that Scandinavians could not fall behind other immigrant groups, particularly the Germans, who were already organizing their own regiments.4

As the 15th Wisconsin Regiment was organized, its companies adopted Scandinavian names like the St. Olaf Rifles, the Wergeland Guards, Odin’s Rifles, the Norway Bear Hunters, and the Scandinavian Mountaineers. The regiment’s flag contained a motto in Norwegian, “For Gud og Vort Land,” meaning “For God and Our Country’”  The unit had 115 men whose first name was Ole.5 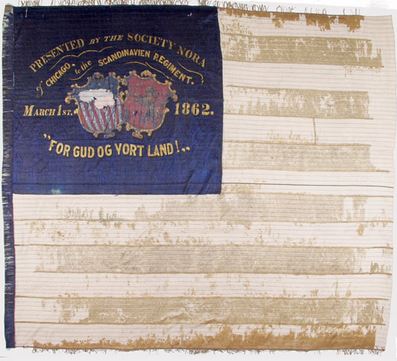 Flag of the 15th Wisconsin

The immigrant Heg had done well as a soldier and at the age of 33 he was commanding a brigade in the Chickamauga Campaign. He had led the crossing of the Tennessee River on August 29th, 1863, skillfully hiding his men and slipping his boats into the water before the Confederates were aware he was there. He established the beachhead that the rest of his division crossed at.6

Now, three weeks after the crossing, he ended his letter to his wife with the words of a lonely husband longing for home, of a young man wanting to be with his wife. After fantasizing about being allowed to go back to Wisconsin after this impending battle at Chickamauga Creek, he wrote “Good Bye my Darling — write often.”7

A collection of 210 letters home sent by Hans Heg are available here at the web site of the Wisconsin Historical Society.