Germans in the Civil War: The Letters They Wrote Home
By Walter Kamphoefner and Wolfgang Helbich
Translated by Susan Carter Vogel
University of North Carolina Press, 2006 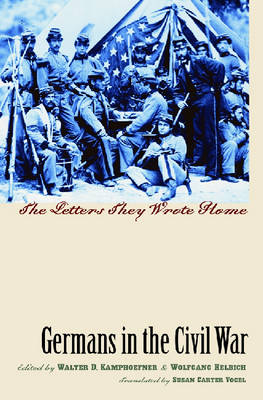 This book review is part of The Immigrants’ Civil War. Scroll down for a full list of articles in the series.

Unlike soldiers of all prior wars, which we know primarily through the words of generals and princes, the common soldiers of the Civil War wrote libraries worth of letters home. Union soldiers were part of the most literate army in human history up to that time. Southerners had a lower literacy rate, but nearly 80 percent could read and write.

But the letters we have don’t come from all parts of the army. The soldiers we don’t hear from enough are African Americans and immigrants.

To have Civil War letters available to collect, a historian needs five conditions to be met.

First, the soldiers must have been literate. Immigrants generally, and Irish immigrants in particular, had a lower literacy rate than the native born.

Second, the soldier must have had someone to write to. The recipient of the letters had to have been literate, or have had access to a literate person to read the letter. New immigrants were often young men without family in America to write to. They would occasionally write to family in the Old World, but the high cost of sending a letter across the ocean made letters home much less common for immigrants than for native-born soldiers.

The native born could sometimes send letters for free via the U.S. Post Office, or, at worst, pay for a low-cost stamp. Letters to Europe were expensive to send. They could take months to reach the recipient, and they had a much higher chance of being lost in transit.

Third, the letters need to have survived into the modern period. Native-born recipients of letters from soldiers often realized that their relative in the army was engaged in an historic struggle that would be of interest to their descendants. In those cases, they carefully collected the letters to save for the returning soldier or to pass on to his children if he died in service.

The European recipients of letters from immigrant soldiers were more likely to see their relatives as involved in an exotic war in a far-off place involving names of people, cities, and states that they were not familiar with. Therefore, they were less likely to collect these letters as historically significant. Also, since the soldier himself was unlikely to return to Europe, there was no point in saving the letters for him as a record of service.

Europe’s terrible conflicts of the first half of the 20th century also insured that many letters that survived the 19th century were destroyed just a few decades later.

The fourth factor is the modern owner of a surviving letter understanding its significance, knowing its historical worth, and making it available for historians. Civil War soldiers’ letters are often valued family heirlooms in the United States. Local history societies and Civil War roundtables have done an admirable job of publishing them in print and on the Internet. European families owning similar surviving letters from long-forgotten immigrant relations may not understand the importance of the letters and may not even know they were written during the Civil War.

The fifth factor is that the historian must be able to read the letter in the language in which it was written. Young people who study American history are often monolingual, or speak a language unfamiliar to most immigrant soldiers. A historian who can’t read German or Hungarian can’t dig into the mine of immigrant letters in those countries.

There is one book that does a thorough job of compiled letters from German immigrants. In Germans in the Civil War: The Letters They Wrote Home, historians Walter Kamphoefner and Wolfgang Helbich compiled a collection of letters from more than 60 German soldiers and their family members. The 500-page volume represents years of work by the two historians, one based in Texas and the other in Germany, culling through the archives.

The book includes a concise introduction to German participation in the Civil War, and all of the letter writers are well introduced to the modern reader. Excellent footnotes and a glossary for the Civil War-challenged, are included. The translations of the letters by Susan Carter Vogel are extremely readable. Overall, this is a stellar work.

The selection of letter writers is incredibly representative. They range from political radicals who support full racial equality and who risk their lives to preserve the Union and end slavery, to wealthy draft dodgers and impoverished deserters. Most of the Germans are Union men, but there are a few convinced Confederates, as well as letters from the embattled German liberals in Texas who risked death for their refusal to join the rebel army.