The early fighting at Chickamauga Creek in Georgia focused on the northern end of the miles long battlefield. By Noon on September 19, 1863, combat was shifting to the center of the Union line. A large Confederate force was bearing down on Brock Farm Field in the middle of the Union position. Three immigrant officers, Norwegian Hans Heg, Russian Ivan Turchin, and German August Willich, would lead brigades within a few hundred yards of each other in this crucial sector.1

Peter Cozzens, the leading historian of the Battle of Chickamauga, wrote of Brigadier General August Willich that on that September day “there was perhaps no officer in either army more thoroughly trained.” The German communist refugee placed his Prussian military education, his years of army experience, and the leadership he had displayed as a revolutionary commander in Germany’s own civil strife at the service of American democracy and the anti-slavery cause when Fort Sumter was attacked. On this day of carnage, Willich led his brigade forward to support the rapidly collapsing center of the Union line. 2 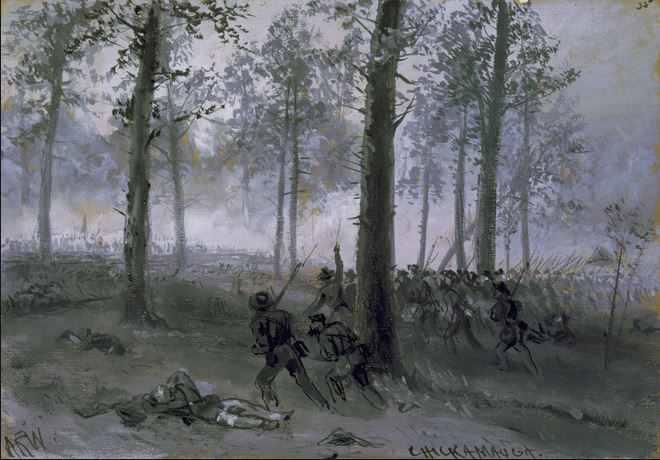 Dense woods and rough terrain made Chickamauga a battleground of deadly surprises.

As Willich’s mixed brigade of immigrants and the native-born met the attacking Confederates they were hit with what one soldier called “a murderous fire of musketry and artillery…and suffered severely.” A German soldier wrote later that “the fire became stronger and a severe battle began. A well-hidden battery [of artillery] thinned our ranks with canister.” The Union men were pinned down. 3

Willich steadied his men and ordered them forward using the new tactic of “advance firing” that he had developed. The formation of four lines of soldiers allowed the men of the brigade to stay in motion towards the Confederates while continuing to fire their cumbersome muskets. Sergeant Alexis Cope of Willich’s 15th Ohio said that the innovation made the men “feel invincible.”4

An immigrant soldier wrote home that when the soldiers were most vulnerable to Confederate fire “the old one [Willich] gave the order for a bayonet attack as the only means to silence the battery. It was made, as only it could be by Willich’s brigade led by the old Willich [himself]…The hurrahs of the boys as they stormed up there one had to hear to understand.” 5

Willich’s men charged forward and in hand-to-hand combat they recaptured a battery of Union artillery that was being fired against them. One of Willich’s regiments, the 89th Illinois, continued its charge in an attempt to capture more Confederate artillery in Huggin’s Battery. Willich saw that the regiment had become dangerously disorganized in the attack. He placed himself in the most dangerous place on the field to reorganize his men. According to an officer who witnessed it:

Willich came forward, and standing in front of the regiment and amid the shower of bullets poured into us, complimented the regiment for its impetuous advance, calmed their excitement, instructed them how to advance firing and maintain their alignment…and by his own inimitable calmness of manner, restored order and confidence in the regiment.6

Willich’s men would need all the confidence he could instill. They would soon face the onslaught of Irish Confederate Pat Cleburne.

This animated map of the Battle of Chickamauga provides one of the best overviews of the campaigns that led to the battle as well as the three days of fighting along Chickamauga Creek.