Union troops began moving towards Confederates in southwest Missouri at the end of January, 1862. They marched through a frontier region beyond railroad resupply. Food and ammunition had to be shipped over rough roads in wagon trains organized by a young officer named Phil Sheridan, the son of Irish immigrants. German-born Brigadier General Franz Sigel led two of the four divisions of this army. Sigel’s division commanders were themselves immigrants; Peter Osterhaus from Germany and Alexander Asboth of Hungary. 1

As a young man, Osterhaus served as a reserve officer in the Prussian army. In his mid-20s during the revolutionary upsurge in 1848, he joined the Liberals and met the young revolutionary military leader Franz Sigel. He, like thousands of others, fled to the United States after the suppression of the revolt. In 1856, he became active in politics in support of the anti-slavery Republicans. That same year he met Abraham Lincoln. In 1860, he moved from southern Illinois to St. Louis. Unlike many of that city’s Liberals who were often critical of religion,  Osterhaus was a Catholic who combined strongly abolitionist beliefs with a liberal Catholicism.2

Alexander Asboth was a Hungarian Liberal who was a military academy trained professional soldier. In 1848 he joined Lajos Kossuth’s revolutionary army. Like Sigel and Osterhaus, he left his native land after the failure of the revolutionary movement and immigrated to the United States in 1851. He had been a member of an international movement to replace Europe’s outdated monarchies with republics. Now he fought to eliminate a feudal labor system in Missouri.3 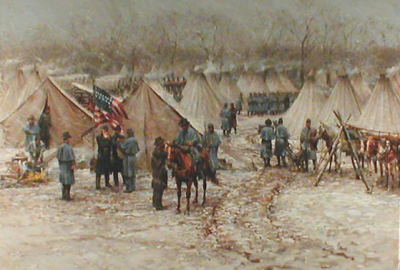 The City of Soldiers that was the Union army camp before Pea Ridge.

The Union Army of the Southwest had 12,000 men under arms, at least a third of whom were immigrants. While the bulk of the foreign-born soldiers were Germans and Irish from St. Louis, many other immigrant soldiers had been living in small German rural communities and isolated farmsteads. The leading historians of this campaign write that these immigrants and their native-born Unionists neighbors ”had a personal stake in the success of the campaign. Since the beginning of the war the secessionists had driven large numbers of unionists from their homes… Thousands of refugees fled” to safety behind Union lines. The only hope these refugee-soldiers had to regain their homes was if the Union won a decisive victory.4

The Confederate force facing the advancing Unionists was larger than their enemy. An army of pro-Confederate Missourians under General Sterling Price included men who had headed south when the St. Louis Germans had helped secure the northern half of their state for the Union the year before. A second army under former Texas Ranger Ben McCulloch was drawn from Texas, Arkansas, and Louisiana. The two Southern commanders did not respect one another and often were not even on speaking terms. To end the infighting, Confederate President Jefferson Davis placed General Earl Van Dorn in overall command. Van Dorn’s incompetence would prove even more dangerous to the Confederates than Price’s and McCulloch’s feuding.5

McCulloch’s army of 8,700 Texans, Arkansans, and Louisianans was nearly as large as the entire Union Army of the Southwest. The Confederate Missouri army had almost 8,000 men.  Combined, the two Southern forces had nearly 50% more men than the Unionists racing forward to offer battle. 6

Video: The African American Experience During the Civil War in Missouri