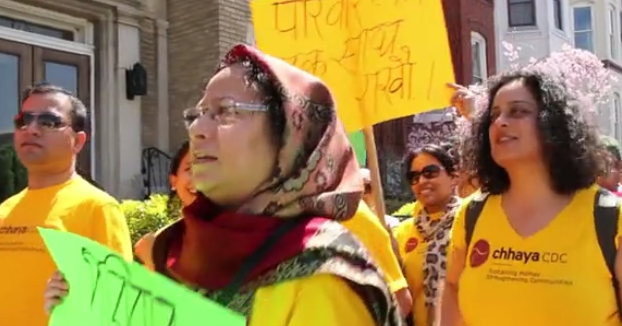 This article originally appeared on Feet In 2 Worlds.

Magdolyn Kawas, 23, lives in Brooklyn, NY with her mother, two younger sisters, and an older brother. Eight years ago the family suffered a difficult loss when their father, an undocumented immigrant, was detained by Immigration and Customs Enforcement (ICE) and held for over 2 years before requesting self-deportation. They have been separated from their father ever since.

Kawas’s family is Palestinian. They immigrated from Jordan nearly 20 years ago and, with the exception of her father, all have legal status as permanent residents or naturalized citizens. Kawas considers herself an American, a Muslim, and more recently an immigration reform activist. Through her involvement with the Arab American Association of New York, Magdolyn is advocating for families who have been torn apart by the immigration system.

In this video we follow Kawas to Washington, DC as she joins tens of thousands of demonstrators from around the country at an immigration reform rally. She gets the opportunity to share her story with Senator Chuck Schumer (D-NY), and highlight the importance of family unification in immigration reform.