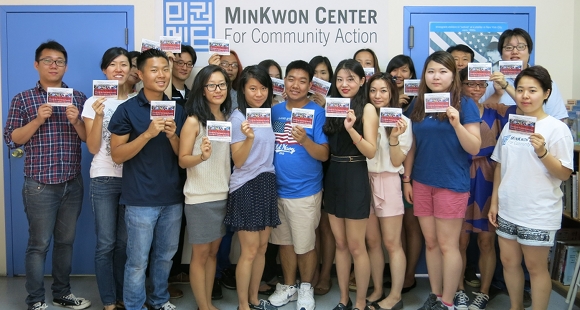 In advance of the July 10 House Republican “special conference,” Korean American community members of New York sent hundreds of postcards to Congressman Peter King, urging him to support comprehensive immigration reform. Launched in June by the MinKwon Center for Community Action, the postcard campaign highlights a growing Asian American constituency on Long Island that is increasingly ready to flex their political muscles.

According to the 2010 Census, the Asian American population on Long Island grew by an astonishing 56.6% in the last decade. In an exit poll conducted in 2012, close to 70% of Asian American voters on Long Island expressed support for comprehensive immigration reform. The polling results are not surprising. There are 1.3 million undocumented Asian immigrants living in the shadows in need of a path to citizenship. 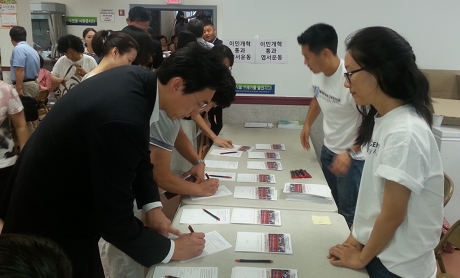 MinKwon held a postcard drive at Arumdaun Church in Bethpage

The current immigration system disproportionately harms Asian American families, as massive backlogs lead to heartache. Asian Americans sponsor more than one-third of all family-based immigrant visas. Of the almost 4.3 million close family members of U.S. citizens and legal permanent residents waiting to be reunited with their loved ones, over 1.8 million are Asian American and Pacific Islanders. Of the top five countries with the largest backlogs, four are Asian nations – the Philippines, India, Vietnam, and China. It seems unthinkable, but the reality is that families from the Philippines wait up to 23 painful years to be reunited.

Time is running out for comprehensive immigration reform. Though last month’s passage of a comprehensive bill in the Senate was an historic milestone, the Republican-controlled House of Representatives has made little progress. The standalone bills they have introduced thus far are unacceptable. Their “piecemeal” approach provides no respite, no real solution for the millions of mothers, fathers, and children separated by our broken immigration system. We need a comprehensive plan that includes a pathway to citizenship and keeps families together.

Now is the time for Republican House members to stand up for comprehensive immigration reform. Please join us TODAY and help us send this message to Congressman King loud and clear! He can be reached at (516) 541-4225.