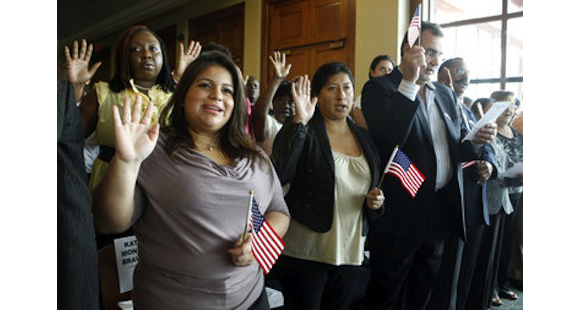 This is the second part of our new series by esteemed historian, professor, and activist Michael D’Innocenzo. Inspired by our enormously successful summit on immigration on Feb. 26, of which he was co-director, the articles are based on a series that originally appeared in The Island Now. You can read the first part here.

Long Island Wins’ summit on immigration at Hofstra University, which took place in February, energized me and scores of other Long Islanders. It prompted me to think about one of the central themes of my nearly 60 years of high school and college teaching.

E Pluribus Unum was the first national motto developed in 1776 by those perspicacious leaders, Franklin, Adams, and Jefferson.

Often, only one of the two meanings of that motto has been recognized: the forming of one nation out of 13 quasi-independent units. (Or, as John Adams wrote, “How thirteen clocks were made to strike as one.”)

The other explicit intent of our first U.S. motto was how one people were being formed from the most diverse population assembled anywhere in the 18th century world.

The summit on immigration, titled, Long Island at a Turning Point—It’s Everyone’s Opportunity, graphically illustrated that both those themes are still at the center of our lives in 2015.

Our efforts, as the Constitution preamble states, “to form a more perfect union,” encounter daily frustrations with Washington gridlock and conflicts between the national and state governments.

Particularly relevant to the summit on immigration is whether E Pluribus Unum (one from many) has been—and should remain—a worthy ideal for the United States.

No nation in the history of the world has been so welcoming of so many people who came from so many different cultures. The inclusion spirit of a “Melting Pot” affirms the humanity of everyone: that the fusion would produce an “alloy” that would be better than any of its components.

Yet, that ideal should not preclude considerations of “Mosaic” and “Salad Bowl” frameworks.

As the breakout groups recognized at the summit, there are more complexities in the “Americanization” process than even empathetic folks tend to acknowledge.

In thinking about the enormous challenges (and opportunities) of immigration and ethnicity in 2015, we cannot afford to become prisoners of the present.

That is a perilous position because it blocks historical perspectives that enable us to understand better how we got to where we are today, and, thus, have a chance to get a better sense of how we might proceed in the future.

Long Island Wins, the exceptional partner of the Hofstra Center for Civic Engagement in the summit on immigration, strives to foster a “welcoming” spirit for newcomers and an expanding sense of community for all Americans.

However, that has never been easy; nor is it accomplished without sustained attention and the good works by people who seek to fulfill our nation’s highest principles of inclusion and social justice.

Our immigration history reveals that, while there has been much celebration of newcomers as “choosing Americans” (who affirmed our nation’s “exceptionalism” by voting with their feet to come here), there has always been a concern about how different groups would “fit in” with the existing American society.

It is not surprising that Queens College historian, Thomas Wheeler, subtitled his book, “The Anguish of Becoming American.”

And I will never forget the class I took at Columbia with John Higham, whose class discussions illuminated some of the struggles I experienced, coming from an immigrant family.

These studies—and many others that could be cited—illustrate that, while popular culture often celebrates the positives of immigration, many folks have little sense of the difficulties in the process of being accepted and advancing in American society.

Central to most considerations of our past and future is the theme of E Pluribus Unum: Is it desirable to seek—or to rush—a “melting pot,” instead of appreciating a “salad bowl” (where the separate “ingredients” are part of an entity, but each retains distinctive flavors while also enriching the whole)?

Caring citizens can benefit from checking the website of Long Island Wins, which features information from the summit and, equally important, the stories of some present-day immigrants in our melting pot/salad bowl/orchestra/quilt/mosaic.