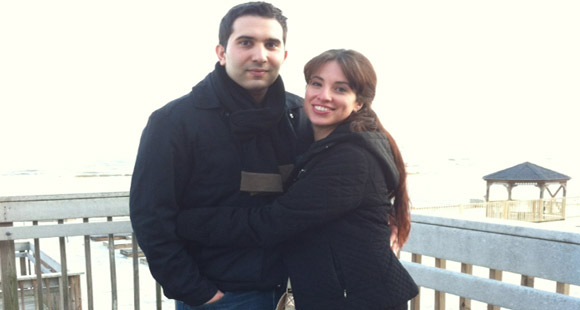 Our story began in France during a year I spent studying abroad in college. Fadi was my age and a student, too, but our similarities ended there.

His father came to France from Iraq as an adult and the successive tragedies of the Gulf War, the embargo, and then the most recent war, almost tore his family apart. Even in Paris, Fadi was no stranger to experiencing prejudice because of his name and appearance.

After several years living together in France, we moved to my home state of New York, thinking naively that we would have more opportunities in America. We were too innocent to understand the roadblocks that lay ahead.

Fadi came to New York on a one-year student visa, which was dependent on paying thousands of dollars in college tuition. In 2009, at the height of the financial crisis and several months before graduating, he applied for an F-1 Optional Practical Training (OPT) visa, a one-year extension to his student visa that would allow him to find temporary work in his field of study, which was communications.

For months we waited to hear back about his status. During this time, Fadi could not work or leave the United States. I would return home from a long day at work and find Fadi lying on the couch, depressed that he was not allowed to work and despondent that he was not able to return home to see his family and friends. Our relationship suffered under the financial and emotional strain.

With each call and e-mail to U.S. Citizenship and Immigration Services (USCIS), Fadi received very little information. This was just the way it went, they told us. Although this was never explained to us outright, we knew: Fadi’s application could take much longer to process because he was Iraqi and had visited that country several times. This was evident to us because of the issues Fadi had always faced when entering or leaving the United States; even though he always travelled legally and had never had a brush with the law, he would often be pulled aside by customs agents for questioning.

We finally received the response we had been waiting for from USCIS in December 2009, nearly six months after Fadi postmarked his letter. We sat on the couch together as Fadi opened the envelope, both of us so nervous that we could barely breathe. Inside the envelope was Fadi’s visa, which he held up to me with tears in his eyes. Then he began to read the letter aloud, the contents of which shocked us: Fadi would only have several months to find a job in communications and the elapsed time since he had graduated would be subtracted from the amount of time he would legally be allowed to spend in the United States. This meant that, after finding a job quickly at the height of the financial crisis, Fadi would have less than a year until his visa would expire and he would need to leave. That night, we made a decision. Unwilling to separate, we decided, at 24 years old, to get married.

Although marriage had been far from our minds – I wanted to finish graduate school first and Fadi wanted to be employed and financially independent – we realized this was our only option to stay together. Because I am an American, a marriage would grant Fadi a green card and, eventually, American citizenship. Naively, we thought this would be an easy solution and that we would soon be able to get on with our normal lives. Check back next week for the second part of our story from marriage to green card.