When Abraham Lincoln was assassinated in 1865, he instantly became a saintly figure to most Northerners. It is the image of Saint Lincoln that was passed down for generations after his death. We should remember though that in 1862 Lincoln was still a politician, and in the fall of that year his party had suffered a serious political defeat in the elections.

Years later, Lincoln’s secretaries would recall that after the election “Mr. Lincoln was exposed to the bitterest assaults and criticisms” from the left wing of his own party. Even though the president had just issued the Preliminary Emancipation Proclamation, the “radicals” believed that his policies had been too moderate. They argued that slavery should have been abolished immediately and that Democratic generals like George McClellan should have never been given important commands.

Lincoln became exasperated with his critics. According to Lincoln’s secretaries; “To one friend who assailed him with peculiar candor, he made a reply which may answer as a sufficient defense to all the radical attacks…”

In his autobiography, German leader Carl Schurz admitted “That ‘friend’ was I.”

Schurz was the radical who had attacked America’s secular saint at the very time Lincoln was creating the legal framework to end slavery.

Schurz was then serving as a Union general in the Army of the Potomac. Lincoln was his commander in chief. Under the circumstances, a letter from a general criticizing a president for his political defects was unusual. But Schurz was a “political general” with an emphasis on “political.” He wrote to the president as a self-appointed spokesman for the left wing of his party. Schurz said later that “I wrote…to Mr. Lincoln, giving voice to the widespread anxiety as I understood and felt it.”

Lincoln and Schurz exchanged four letters on the elections. Lincoln’s exasperation with his ally Schurz comes through in phrases like this “I just received and read your letter…The purport of it is that we lost the late elections…because the war is unsuccessful, and that I must not flatter myself that I am not justly to blame for it. ..You think I could do better; therefore you blame me already. I think I could not do better; therefore I blame you for blaming me…”

Lincoln got particularly nasty at Schurz’s implication that the president was politically incompetent. Reminding Schurz that not everyone thought the immigrant himself was a great general, Lincoln wrote; “Be assured, my dear sir, there are men who…think you are performing your part as poorly as you think I am performing mine.”

Lincoln rejected Schurz’s call to purge Democrats from the army’s high command. Lincoln told Schurz that he needed competent generals more than he needed political loyalists. When it came to leading the army, Lincoln wrote, “I must say I need success more than I need sympathy, and that I have not seen the so much greater evidence of getting success from my sympathizers, than from those who are denounced as the contrary.” In short, Republican generals had disappointed as often as Democrats.

In his autobiography, Schurz said that Lincoln later forgave his criticism as that of a dedicated “anti-slavery man.” Schurz wrote that he met with the president and that Lincoln slapped the immigrant general on the knee and laughed “Didn’t I give it to you hard in my letter?”

Or perhaps after the assassination at Ford’s Theater Carl Schurz needed to show that he had “gotten right” with America’s secular saint. 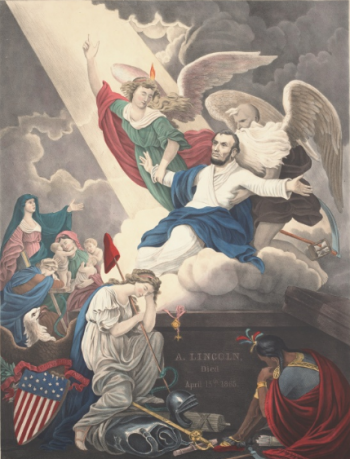 Lincoln being escorted by angels into heaven after his assassination.

This interview with Doris Kearns Goodwin on her book Team of Rivals gives a hint of the problem for any of Lincoln’s contemporaries who disagreed with him.

“Behind the Lines” Interview with Jim Downs

Jim Downs, Assistant Professor of History and American Studies at Connecticut College and author of “Sick From Freedom: African-American Illness and Suffering During the Civil War and Reconstruction”

Due to Hurricane Sandy, we were unable to insert our normal footnotes. This will be corrected when we have power back.