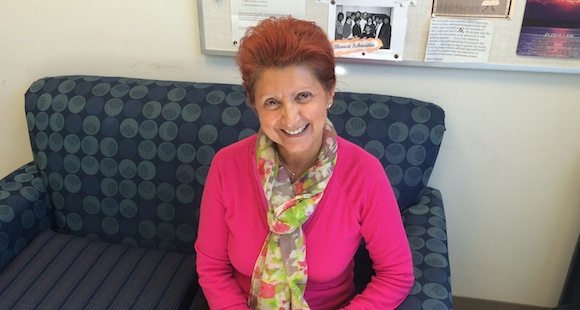 There are many things to be said about former U.S. Senator Alfonse D’Amato, good and bad. But most people wouldn’t necessarily put “a good listener” near the top of the list.
So the fact that Blanca Schneider convinced D’Amato to bring a meeting to a full stop and say, “That’s it. Close the doors. Everyone sit down. We are going to listen to the lady.” Well, maybe we should all listen.

That’s even more impressive when you learn that, before coming to the U.S., Blanca, whose maiden name is Ligor-Galan, didn’t really want to learn English. Studying advertising in her native Bogotá, Colombia, she remembered thinking, “Oh, my God! This is so hard.”

But in the years that followed, Blanca didn’t just learn the language—she became a voice for the Hispanic and immigrant communities on Long Island, as well as a guiding light and champion for people in need.

In 1973, she accepted the invitation of a cousin to come to Flushing to work and study English. She began to work as a caretaker for an elderly Jewish man in Hewlett, while taking English classes at the Queens Adult Learning Center. It was in these classes that she first met people of undocumented status.

“I met people from all over the world—from Honduras, from El Salvador,” many of whom were undocumented. “I was like, ‘What does that mean?’” she said.

She would soon learn. Blanca had come to the U.S. on a visitor’s visa, which expired before should could change it to a student visa. For several years, she lived undocumented in the U.S. Blanca recalled the profound feeling of isolation that came with being undocumented.

“You are always on guard,” she said. “I remember my cousin saying, ‘Don’t go in public places. Don’t get into trouble. Because if the police stop you and you don’t have papers, they will deport you.’”

Fortunately for her, this period didn’t last long. She soon married Ira Schneider, a Jewish American living in Merrick. The marriage allowed her to become a permanent resident and earn her citizenship in 1983. She has since raised two sons, one of whom is earning his Ph.D. in clinical psychology, and has one grandchild.

The experience of being undocumented left a lasting impression on her. It was part of what inspired her to dedicate her life to social justice causes, including the undocumented. She went on to work as a community organizer for the Economic Opportunity Commission, fighting for the rights of the Hispanic community—documented and undocumented alike.

She fought to help Hispanic residents in Nassau County get access to Medicare and Medicaid, as well as find affordable housing, and obtain legal aid.
“We would take huge buses to Washington to speak to politicians,” she said.

One of her proudest moments came at a hearing about housing discrimination in Nassau County in 1979. Blanca, frustrated at the lack of respect Hispanic constituents were receiving from politicians, stood and approached then-Senator D’Amato, demanding, “What about us? You’re not listening.”

And that’s when he shut the meeting down for her.

His reaction startled her. But she kept her cool and pleaded the case of the 20 residents she had come to represent. After hearing her out, D’Amato took her name and address, promising to send a lawyer to handle each individual’s case—which, to her surprise, he did.

The moment taught her something about herself: “Even with my accent, I have a big mouth,” she joked.

Blanca went on to study social work at Adelphi University. In 1983, she completed her Master’s degree and got her license in psychiatric social work.

Today, Blanca works as senior counselor/drug and alcohol educator at SUNY Old Westbury—the most diverse university in the Northeast—where, for the past 26 years, she has worked with troubled students, including undocumented students. While she helps students of all ethnic backgrounds, she remembers fondly the work she did with the Hispanic community and how those challenges have inspired her.

Blanca believes the Hispanic contribution to this country is greatly understated. She quoted a Catholic priest from Great Neck who, years ago, had said to her, “If Hispanics would stop working in restaurants, cleaning houses, landscaping, construction… if they stopped for an hour, the economy would go down. They are the ones doing the hands-on, heavy-duty work.”