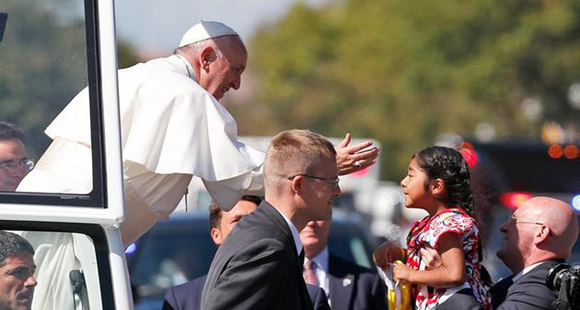 From the moment Pope Francis addressed the American people, he put a strong emphasis on welcoming immigrants. On the White House lawn, the Pope introduced himself as “the son of an immigrant family” and reminded us that America was built by immigrant families.

In a historic speech, Pope Francis urged Congress and the American people to embrace immigrants

“We must not be taken aback by their numbers, but rather view them as persons, seeing their faces and listening to their stories, trying to respond as best we can to their situation. To respond in a way which is always humane, just and fraternal. We need to avoid a common temptation nowadays: to discard whatever proves troublesome. Let us remember the Golden Rule: Do unto others as you would have them do unto you.”

“We, the people of this continent, are not fearful of foreigners, because most of us once were foreigners.”

The Pope’s immigration plea comes at a time of divisive anti-immigrant rhetoric on our national stage. His message was clear. As Americans, we must live up to the high standards that we set for ourselves.