This November, Legis. Carrié Solages (D-Elmont) became Nassau County’s first Haitian American elected official after a hard-fought victory over the Third Legislative District incumbent John Ciotti. Raised on Long Island by Haitian parents, Solages overcame the struggles of a second-generation immigrant to serve as a prosecutor in the Bronx and the head of the Nassau County Commission on Human Rights before running for the legislature.

Long Island Wins recently caught up with Solages to ask about his background, the economy, and racism he encountered during his campaign:

LIW: The area you represent is one of the most diverse on Long Island, with immigrants from around the world. Did your campaign encourage immigrant communities to vote?

CS: Many different immigrant groups in this community saw that this was an opportunity to have other voices included in our public dialogue. In my own community, the Haitian community, I’ve seen a subculture develop where people don’t want to participate, they don’t want to vote, they don’t naturalize. But by example, my election encouraged other groups to get involved. This is about more than the election of one individual; this about several communities gaining the opportunity to get involved. 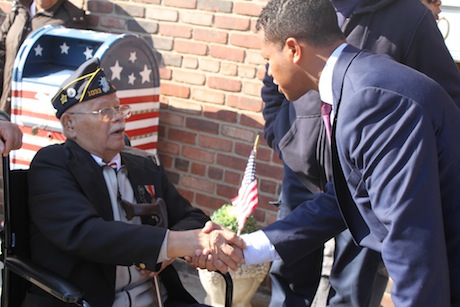 LIW: Since you’re in such a diverse district, how important are immigrant contributions to the greater good of the community?

CS: A significant portion of the businesses in my community are run by immigrants or the children of immigrants: Haitian bakeries, Jamaican bakeries, Pakistani grocery stores…that’s a driving force of our local economy. We’ve seen three Dominican businesses open up in just the last year in my district. I’m going to help play a role in letting all of these communities grow together.

LIW: Tell me a little bit about your own family’s story.

CS: Both of my parents came from Haiti, they immigrated here in the early 70s. I was born in Queens, but like most people we moved here for a better education. I went to public schools; I distinctly remember that my teachers treated me as inferior because my parents came from another country. It’s still a problem for immigrant students today. There are education issues that arise when a language barrier and a cultural barrier exists, and you need a partnership between the school, the kids, and the family to get these kids the education they deserve.

LIW: Readers have heard about the racism you encountered during your campaign, when a Ciotti booster hurled racial slurs at your sister. What happened?

CS: That incident was an issue of voter intimidation, and, as we found out throughout the campaign, there were many people who were being intimidated. But the press around the incident just made people more aware that there was an election, and we turned a negative into a positive.