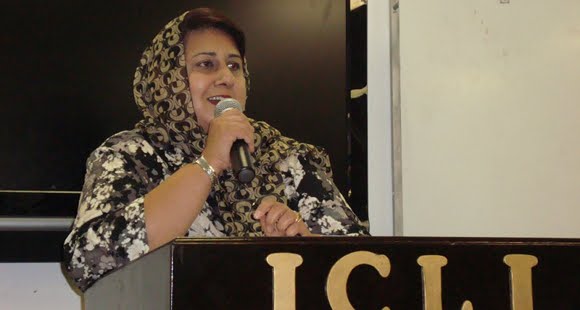 Shattering molds is nothing new to Dr. Isma Chaudhry. For more than a decade, she has been dedicated to breaking down stereotypes about Islam and Muslims on Long Island.

It only makes sense, then, that Isma earn the mantel as the first woman president of the Islamic Center of Long Island (ICLI) in Westbury.

In fact, her new role as president of ICLI makes her the first woman in the tri-state area to be named president of a mosque. In response to her election, Isma said, “I’m very humbled and very honored to be serving my community and the community at large in that capacity.”

Isma’s journey began in her native Lahore, Pakistan, where she worked as a practicing physician. She did her post-graduate work in England before returning to Pakistan. After getting married, she moved with her husband to Manhasset on Long Island, where she now works as a doctor of internal medicine.

It was while her children were in middle school that Isma first began her quest to educate Long Islanders about the realities of Islam and the Muslim experience. The private school her children attended had only three or four other Muslim students, she said. During the winter holidays, she said, “There was this uncomfortable feeling amongst my kids as to who they were and everybody has some celebration that everyone knows about and they don’t.”

This inspired Isma to put together programs for the school to help teachers and students understand the holidays and cultural norms of Muslims. Before long, she was doing the same for other private schools. Eventually, she began receiving invitations to speak at public schools, and later colleges.

“There was a great need among faculty to get to know their students,” she explained. “For example, during the month of Ramadan, [Muslim] students fast. They don’t dress up and go to school dances. And people need to know why they are doing [something] or why they are not comfortable doing [something else].”

Isma speaks passionately about her religion, and takes great pride in helping others understand it better—and in particular, breaking down the image of Muslims and Islam so often portrayed in mainstream media. These are the images, she said, that “stick in the mind” of most Americans.

She noted that her new role as president of ICLI will be “in more of an administrative capacity,” and that, despite her ongoing efforts to dispel myths about Muslims and Islam, she does not consider herself a religious scholar.

Long Island’s Muslim community has been overwhelmingly supportive of her appointment, Isma said, even from senior members of the community. “I guess they recognize my credibility to serve in this position,” she said.

Although she acknowledges that this is a step forward for Muslim women everywhere, she insisted the issue of women’s equality is not truly a religious issue. “When we talk about men and women and equality… it is more of an ethnic phenomenon or a cultural phenomenon than a religious phenomenon,” she said, while noting that many of these cultures have influenced religion because most religions have historically been conveyed through men.

Isma admitted that it is difficult for her to balance her cultural and religious traditions with her American lifestyle. “But I think it’s OK,” she said. “These are the kind of challenges that every immigrant community faces… How you approach it is very important.”

When Isma isn’t breaking down myths about Muslims, she’s helping break down myths about immigrants on Long Island. She does this through her role as board co-chair at my organization, Long Island Wins. Isma’s leadership has helped to move forward the positive contributions immigrants are making to create stronger and more sustainable Long Island communities.

“When an immigrant population moves to another country, they bring their own skills and their own desire to work toward success,” she said. “That success is not just contained to their community or family. It spills over to the community at large.”

Isma said she’d like to see more schools, community centers, and libraries take an active role in welcoming immigrants and educating the native-born population about the value immigrants bring to the community. “We need to have a community-based approach to learning about each other,” she said, adding, “We cannot live under this blanket of myths and misconceptions.”