Karl Frick was in his early twenties when he arrived in the United States from Germany just six years before the Civil War. He married another young German immigrant named Alwine and started a prosperous farm in Missouri and opened a store there as well. A liberal, he was a religious freethinker, opposed to slavery, and he soon joined the Republican Party. When war broke out, he joined a pro-Union militia company in his divided state. 1

Karl wrote to his mother in Germany in 1861 to explain that the Civil War “isn’t a war where two powers fight to win a piece of land, instead its about freedom or slavery, and as you can well imagine dear mother, I support the cause of freedom with all my might.”  He told his mother that the war was being fought over the treatment of blacks. He told her slaves were “treated like animals and sold at will, which any civilized human being must be against.” Karl told his mother that the slave trade in America “is the most abominable thing there can be in a civilized nation.” He was particularly upset by the specter of slave families being destroyed for the profit of the masters. He wrote that “parents are torn from children, man from wife, and sold, never to see each other again.” As the war was caused by slavery, Karl believed it could only end through its abolition, “for”, he would write later, “slavery is the sole cause of this disastrous war.” 2 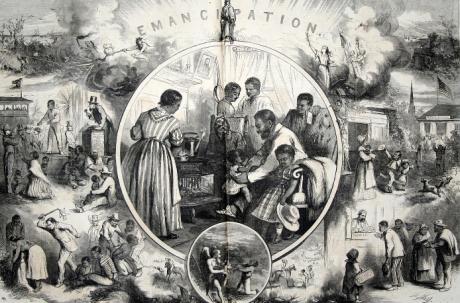 Many German immigrants were disappointed by Abraham Lincoln’ slow move towards emancipation.  He had counteracted Union General John Fremont’s declaration freeing Missouri’s slaves in 1861. It was not until September 22, 1862, following Union victories at South Mountain and Antietam, that he issued his own Preliminary Emancipation Proclamation promising to free slaves held in the Confederacy unless the rebellion ended before January 1, 1863.  Although the proclamation did not immediately free any slaves, it placed the Federal government on the side of freedom.3

A few days after Karl learned of Lincoln’s proclamation, he wrote that it would “certainly deal the deathblow” to the Confederacy. He said that it was the labor of enslaved blacks that was “the backbone of the rebels, doing their work at home and raising their crops while their owners went of to war.” With slavery ended, the United States would finally fulfill its democratic promise and would “stand on a new firm base, more glorious than ever.” He saw the United States becoming an international force for human rights, writing that “as soon as we have freed our country from the curse of slavery, other countries can be taken care of.” 4

Karl Frick could write proudly now to his family across the Atlantic that, “Our motto is that all men are created equal, whether black or white.” This was the first time in American history that an honest man could say that.5

The blog Civil War Emancipation has regular updates on scholarship about the ending of slavery.