The Union loss at Chancellorsville was felt on the home front as well as on the battlefield. For the immigrant soldier Peter Welsh, the home front extended not only to his wife’s home in New York City, it also crossed the Atlantic to Ireland. As an Irish Catholic husband, his duty to his wife was a sacramental obligation. Her family in Ireland demanded to know why he had left her bed to serve in what they saw as a foreign army. A month after Chancellorsville and a month before Gettysburg, Peter Welsh wrote what must have been a very uncomfortable letter to his father-in-law in Ireland.1

Peter began his letter by acknowledging that “It is under very peculiar circumstances that I now address you.” The circumstances were “peculiar” because he had never written his wife’s father before and because he had enlisted in the army without getting his wife’s blessing. Of his joining the army, Peter said that the move “no doubt seems unaccountable to you.” Peter continued “as the father of my dear wife I do not wonder that it should seem very very strange that I should voluntarily join in the bloody strife of the battlefield.”

This photo of Margaret Pendergast Welsh, wife of Peter Welsh, was taken after the Civil War.

In his letter Welsh acknowledged that in Ireland, a man who joined the army was despised by his countrymen because he fought for the Queen of England and the expansion of the British Empire. But in the United States, he had not enlisted to oppress another country, but to preserve the free institutions of his adopted land. He also wrote that he fought to keep America as “a common asylum” for “the oppressed of every nation.”

Peter acknowledged that many Irish had said that the war was stirred up by native-born extremists on both sides, and that immigrants had nothing “to do with this war.” Welsh also agreed with the war’s critics that the Irish were mistreated since they arrived in their adopted country and that the immigrant “owes nothing” to the native-born. Nativist bigotry and the self-righteous selfishness of many citizens-by-birth were quite familiar to the New York Irishman. Welsh made it clear that he was not fighting for the nativists, but for the American Union and, in particular, for its Constitution. He told his wife’s father that the immigrant owed it to himself and to his future descendents to preserve a country where all could rise.

Welsh also reminded his father-in-law that in America, Irish women like his wife could play a part that they could not in their homeland. Irish women found jobs in the U.S., and through their remittances home they had supported their parents and brothers and sisters. He hailed “those noble hearted girls” who sent part of their wages back home to preserve their poor families in Ireland. American freedom had saved the lives of many Irish families during the famine because it provided immigrant daughters with an opportunity to earn a living. 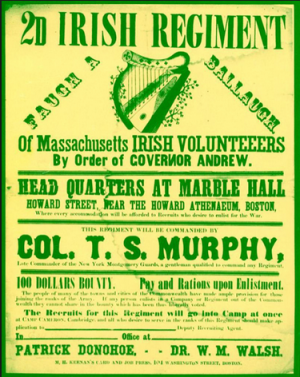 Recruiting poster for the regiment that would become the 28th Massachusetts, which Peter Welsh would join in 1862.

Although his enlistment in the 28th Massachusetts Regiment of the Irish Brigade meant danger for himself and left his wife “lonesome,” as he put it, Welsh intended to see the fight through. The army was at perhaps the lowest point in its history, but still he wrote:

I am the color sergeant of my regiment. I carry the green flag of Erin… I feel proud to bear that emblem of Ireland’s pride and glory and it shall never kiss the dust while I have strength to hold it.

Peter made it clear that he was not excited by any lust for blood. He wrote that his thoughts were with his wife and said “I hope this war will soon come to an end, then we will be happy together once more.”

The war would not end for two more years and Peter Welsh might not live to once again enjoy the comfort of his young wife’s love.

Video: Dr. Kevin Weddle presents Gettysburg Strategic Leadership Brief at the Army War College in 2012. The Immigrants’ Civil War will offer a number of lectures explaining all aspects of the Gettysburg campaign. This one was given to officers receiving graduate leadership training.